Israel: From the "You gotta be kidding me" department....

Believe it or not, Yahoo News just ran with the following headline: "Israel is Going to War in Syria to Fight Iran".  Then the article goes on to say, "Israeli officials believe that Iran is winning its bid for dominance in the Middle East."  Yeah, duh!  https://www.yahoo.com/news/israel-going-war-syria-fight-163719157.html

Of course Iran is winning that bid -- winning it hands down, taking the trick without even trying.  And why?  Just think for a minute.  Why would anyone in their right mind in the Middle East even consider wanting Israel to be the dominant force in the Middle East when everyone there clearly sees what Israeli neo-colonialists have done to the Arabs in Gaza -- and now have in mind for them too.

After seeing exactly what abominable horrors go on once Israeli neo-colonialists get their hands on your turf, Arabs have no choice but to fight tooth and nail to keep this nightmare from happening to them too.  Good grief, can you blame them?

As the Biblical prophet Micah once said, "A little bit of love and justice goes a long way."  And in this case, a little bit of dominance by the sadists in Tel Aviv goes a really really long way.  Would you seriously want the butchers of Sabra and Shatilla to get their hands on your home town?  With Yom Kippur upon us, how can these creepy gonifs even have the chutzpah to claim to be Jewish!  https://occupiedpalestine.wordpress.com/2010/10/28/sabra-shatilla-massacre/ 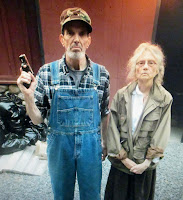 Would you really want to invite these dudes to your party?  Might as well just invite Freddy Kreuger.

And speaking of nightmares, who the freak on this entire freaking planet would ever want to invite America to their party either?  Everyone in this world with any kind of a TV set saw in glorious living color exactly what happened to Iraq, Syria, Afghanistan, Vietnam, Cambodia, Honduras, Chile, Ukraine, Libya -- and even freaking Puerto Rico -- after America arrived at their party without an invitation.  "Nightmare on Elm Street"?  Nah, global nightmare.  Eat your heart out, Freddy!  https://static01.nyt.com/images/2017/09/03/arts/03VIETNAMJP1/03VIETNAMJP1-master675.jpg

Why would anyone on earth ever want America to be the "dominant power" here either?

Stop Wall Street and War Street from destroying our world.   And while you're at it, please buy my books -- thus helping me support my addiction to Justice and Truth.  http://straitwellbooks.blogspot.com/2016/04/our-top-best-seller-right-now-is-bring.html