It's time to start re-thinking America's foreign (and domestic) policies again.  If our huge out-of-control corporations can do huge amounts of immoral things to foreigners as long as there is a profit to be had, then what's to keep them from going after us too?  Nothing. 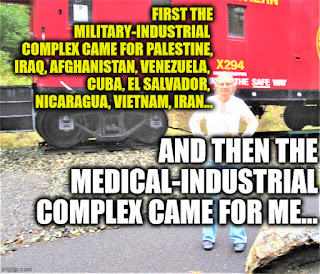 Here's their end game.  Get out the [virtual] boxcars!  https://www.youtube.com/watch?v=6RuYaEeiCE8

Real scientists are being censored.  And we are too!  https://www.youtube.com/watch?v=vUrp5PlnBwQ

Shots are damaging our children's hearts?  Oops, no problem:  https://childrenshealthdefense.org/defender/link-heart-inflammation-pfizer-moderna-covid-vaccines-cdc-advisory/?fbclid=IwAR09q-aK77s7yM8m0jlclqouigc4LGeLUU-V9o0LySGkIkLW7lrT8DimIsI

Posted by Jane Stillwater at 2:04 PM 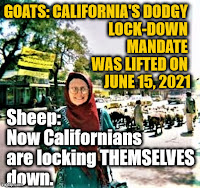 Like someone screaming "fire" in a crowded theater, all we ever heard throughout the year 2020 was "Cases!  Cases! Cases!"  But were there really all that many actual viral cases out there -- or was it mostly just smoke and mirrors?  According to a recent graph supplied to us by the mayor of Berkeley, California, actual deaths from you-know-what amounted to only 0.07% of Berkeley's population back in 2020 -- way before the Pfizer, Moderna & Johnson's shots were even fired.

According to the mayor's graph, deaths from The Virus hovered way down around zero back in 2020 -- and yet the number of "cases" last year shot through the roof.  You can't have it both ways, guys.  Either the virus was deadly or it was not.  And if it really was all that deadly, how come so many PCR tests came back positive -- and yet hardly anybody died?  Or even displayed symptoms?

Obviously, the PCR tests must have been faulty.  If they were not, then most of us would have suffered from runny noses at the very least last year or been stuck in our beds for days if not weeks or would have died -- even if "asymptomatic cases" were even a thing.  And here is the actual smoking gun: 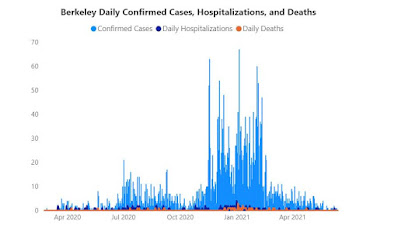 PS:  My research shows that something else of interest is afoot these days regarding COV$D.  Before The Shot became readily available, the evening news called COV$D a horrific deadly pandemic disease, right?  But look at what's happened to it now that The Shot has (allegedly) saved us from the Grim Reaper.  Now the nomenclature suddenly changed.  Why is that?  Here's why: 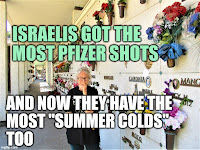 The Shot is designed to give you a small dose of COV$D, right?  So you take that shot.  And then many of you inexplicably end up with some debilitating respiratory disease that may or may not cause you to die -- and this new thing that you have now looks suspiciously like the original COV$D, right?  Only now the evening news tells us that what you have is not a result of taking your shot but is actually only just a mild "summer cold" -- even if it kills you.   https://www.jpost.com/health-science/covid-19-might-be-over-but-viral-infections-in-israel-are-surging-671354

Since it has now become inconvenient for Big Pharma to scream "fire" in a crowded theater (again), post-jab COV$D has been degraded to only a summer cold.  "No cases here.  Nobody's died.  Move along."  And so we all do move along -- even though people are actually dying from The Shot.  Even though our fire exits are blocked.

It's embarrassing to think that every single thing that we've done in the past 463 days has been driven by a well-planned Big Pharma public relations campaign.

Is VAERS deleting the records of people who have been Shot to death?  https://odysee.com/@hugotalks:8/Are-VAERS-Deleting--Replacing-VACCINE-DEATHS-Hugo-Talks--lockdown:c?src=open&r=BDs8q7zJ33C6YN9eZLdx8DwMyNx2gsWg

Is Notorious F.B. deleting the reports of any prominent scientists who don't support the dominant narrative?  Duh, yeah.  https://thehighwire.com/videos/pfizer-vp-the-thing-to-be-terrified-of-is-your-government/

I shouldn't include this damning report from Dr. Richard Fleming so as to avoid giving you nightmares and also so I can keep my Notorious F.B. page, but what the hell:  https://thehighwire.com/videos/live-from-event-2021-in-dallas-tx/

And then there's Robert F. Kennedy Jr giving a presentation that I attended in San Jose recently.  The man is a walking encyclopedia of truly true COV$D facts.  https://rumble.com/visylt-robert-f-kennedy-jr-childrens-health-defense-vac-june-19-2021.html

Growing old gracefully: Face creams help but The Shot does not... 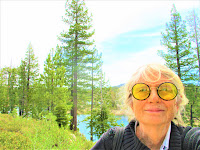 Google just informed me that "Consumers spend an estimated $382 billion on cosmetics each year.  Skincare products alone will represent a $135 billion market by 2021."  Wow.  All that money?  Spent just to keep us looking younger?  Seems to me that looking younger must be a pretty important goal here in America, right?
If this is actually true, then here's a helpful experiment that each of us can easily try at home.  Look closely at all your friends and neighbors who have been locked down for the past 451 days -- and have been given The Shot.  Then report your observations scientifically.  Tell the truth now.  Don't the subjects of your study mostly look at least three or four years older than they should?  Kind of more gray around the skin tone?  Several more wrinkles near the eyes that didn't used to be there before?   Be honest here.  Am I right or what.
So here's my point.  If it's important to you to look less old than your age, then spending money on skincare is probably a good idea.  But if you truly want to look younger, then why are you letting Pfizer, Johnson and Moderna be your beauticians?  That makes no sense at all.  https://rb.gy/plousd 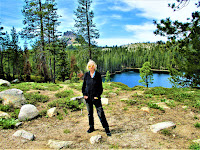 PS:  Speaking of old age, I just got back from spending four glorious days in the magnificent Sierra Nevadas -- one of the highest mountain ranges on the planet.  And what did I learn?  That these monumental megalithic grand escarpments, higher than any imaginable man-made construct on earth, will be doing just fine in another four billion years from now, long after our current corporate war-mongering technocratic propagandized trans-human artificially-intelligent screwed-up locked-down surveillance states have long been forgotten.
There's a moral here somewhere.  "Nature bats last."  Sorry about that, World Economic Forum. 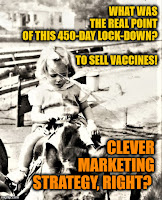 PPS:  There are 1,671,329 residents in Alameda County where my home in Berkeley is located.  Newly-revised-downward figures just issued by county authorities state that only 1,223 of us died from You-Know-What in all of 2020. That's only a 0.07% death rate.  On the other hand, 3,092 of us died from diabetes in Alameda County -- yet we never locked down McDonalds or CocaCola.  What's with that?

When I told a nurse friend of mine what I had just learned about the 0.07% death rate, "That's wonderful news!" she gushed enthusiastically.  But then I realized that she thought I mean it was 0.07% after over 50% of county residents had received an experimental injection.  Er, no. 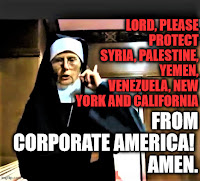 Posted by Jane Stillwater at 11:43 AM