Schrodinger's cat: Living in the dual reality of COV$D

Raise your hand if you've heard of Ervin Schrodinger's famous cat-in-the-box experiment.  Is the cat alive or dead?  You can never know until you open the box.

The same thing is true about COV$D.  For the past 684 days, the evening news has constantly warned us to be afraid.  "Be very afraid."  According to our TV talking heads, people are dying like flies.  This is one reality.  The cat in the box is dead.
And the evening news constantly tells us over and over again that the only solution to this reality is to get tested constantly, wear N95 masks everywhere and to get yet another lipid nano-particle spike-protein jab ASAP.
Meanwhile, the reality that I myself live in is totally different.  In my reality, only 0.07% of people contracting COV$D actually die, based on actual data supplied by my local county public health department, and also that almost all of those dead people were over age 80, already had several co-morbidities and were on death's door anyway.
And in my data-driven reality, the list of those who are injured or die from the vaccine just keeps on piling up -- no matter how much the CDC tries to hide the actual science.  Who knows how many more will be on this list two or three years from now.  Big Pharma's vaccine gift to us just keeps on giving.  My COVID reality is sadder than I can handle without having nightmares.  https://www.bitchute.com/video/8HA7reyJmNWY/
But which reality is correct?
We will never know until the true actual data is revealed and Schrodinger actually opens his COV$D box.  However, Big Pharma has just requested that Schrodinger's COV$D box not be opened for another 55 years, and social media keeps censoring us like we were back in Germany in 1936.  I myself postulate, however, that this COV$D box needs to be opened right now.
PS:  Speaking of quantum mechanics, transparency is always a good thing in a democracy.  Why can't we open any of Schrodinger's other boxes as well?
For instance why can't we open that box containing the data regarding who murdered JFK?  Or the data box about whether or not Syria used chemical weapons (Spoiler alert:  It did not).  Or how about opening the box that contains what actually happened on 9-11?  Or whether or not Bush-slash-Obama-slash-Trump-slash-Biden are trying to gin up yet another "war" in Venezuela-slash-Syria-slash-Ukraine-slash-Yemen-slash-Palestine-slash-Kazakhstan-Russia-slash-China in order to keep our minds off trying to open the box containing Schrodinger's COV$D dead cat.  https://off-guardian.org/2022/01/24/pandemic-narrative-over-false-flag-in-ukraine-next/
_____________________________ 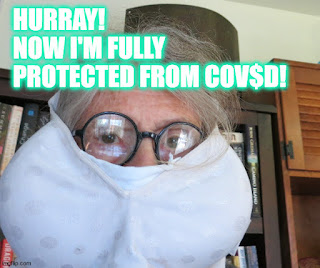 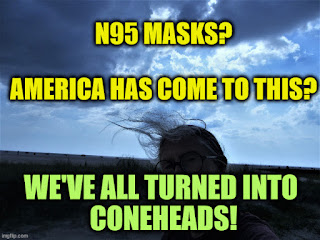 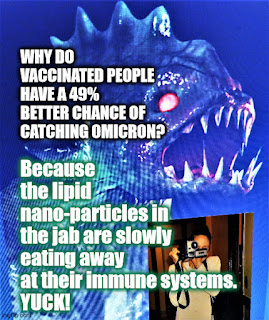 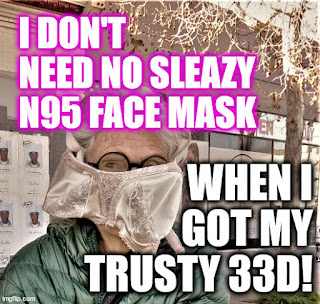 In a battle between Anthony Fasci and Victoria's Secret, guess who would win?!?

For 666 long dreary days now, Americans have been systematically locked down and experimented on like monkeys and lab rats jammed into cages by a Hollywood-style mad scientist. 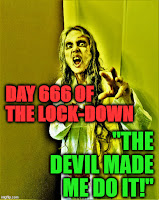 Day 666?  Yep.  Whether we believe in Revelations 13:18 or not, truly evil men are definitely in charge of our world right now.  And what is their goal?  To make us their guinea pigs.  And we Americans are just gonna go along to get along -- as if we have no choice.  There is always a choice.  https://www.youtube.com/watch?v=5kaiLcwHXB4

We keep wearing face masks even though they have been scientifically proven to do nothing but scare little kids.  We keep getting booster shots even though they clearly do not work and pose a real danger to pregnant women -- and to anyone else who doesn't want to have heart problems or a stroke.  We keep screaming "Cases!  Cases!  Cases!" even though only 0.07% of us actually died from COV$D at the very height of the plandemic -- plus those who actually did die had either several co-morbidities or were helped through the Pearly Gates by Rendesiver and vents.

We keep doing everything the "The Science" tells us to do -- even though what it is telling us to do sounds counter-productive and, frankly, a bit bat-shite cray-cray.  And we also keep suffering from Mass Formation Psychosis, Stockholm Syndrome -- while truly evil men just laugh at us behind our backs. 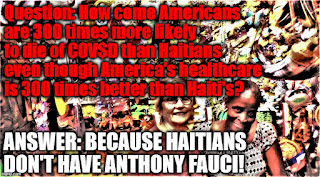 Poor sweet Haitians can't afford lock-downs, ventilators, Rendesivir, vaccines, boosters, face masks or social distancing -- yet their death rate is 300 times lower than America's.  What's with that?  Maybe we should send Anthony Fasci down there to set them straight.

Even our local mayors, school boards and medical practitioners are guilty of crimes against humanity these days -- happily jabbing us all up with experimental concoctions that have already killed over 20,000 Americans and have seriously injured over a million more.  Why?  Because  our local officials are bribed.  Billions in "federal" funds can be a great motivator.  That's just sad.  https://www.globalresearch.ca/biggest-crimes-against-humanity-ever-committed-anna-de-bouisseret-explains-who-will-held-liable-under-law/5765620 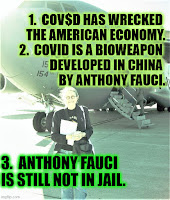 And even Britain's premier medical journal, The Lancet, finally admits that we are now in a pandemic of the vaccinated:  https://principia-scientific.com/lancet-89-of-new-uk-covid-cases-among-fully-vaxxed/
Same old story in Germany.  96% of those with the Omicron variant had already received the jab -- and boosters too:  https://internewscast.com/coronavirus/96-of-germans-with-omicron-were-fully-vaccinated-28-triple-vaxxed-only-4-unvaxxed-government-says/
Day 666?  What is the end game here?  Those Evil Globalist Bastards have even more devilish plans in store for us.  Their end game is to have this lock-down go on forever -- and it certainly looks like it will.  "The Devil made us do it!"  https://home.solari.com/alert-2030-psychological-agenda-obedience-training-for-prek-adults-already-global-with-billions-in-funding-for-full-control-part-4-wef-vision-for-global-education-system/
Resources:
Deliberate experimentation:  https://www.globalresearch.ca/video-reiner-fuellmich-50-lawyers-vaccines-designed-kill-depopulate-the-planet/5767034
Pfizer, Moderna Vaccines ‘Dramatically Increase’ Heart Attack Risk, Renowned Cardiologist Warns
Dr. Peter McCullough Explains How Myocarditis Differs When Caused by Natural Infection vs Vaccine: "Now there's pre-clinical studies suggesting the lipid nanoparticles actually go right into the heart. The heart expresses the spike protein and the body attacks the heart." 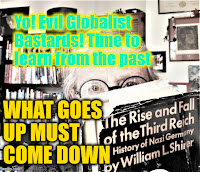 Early in the start of the mass vaccinations, we called these "deaths by coincidence".  We don't joke about them any more.  Carlos Tejada: 49-year-old Wall Street Journal and New York Times writer posts booster shot photo on Instagram, dead hours later
We've seen a huge number of vaccine deaths already -- and it’s getting worse:  https://rumble.com/vs7c9i-huge-number-of-vax-deaths-and-its-getting-worse-dr.-pierre-kory.html  (For some strange reason, I can't get Blogger to support this link but it's well worth the effort to cut-and-paste.)

Fun and Games in Afghanistan: Globalists win, we lose https://jpstillwater.blogspot.com/2021/12/fun-and-games-in-afghanistan-globalists.html

Am I the only one who realizes that leaving all those billions of dollars worth of weapons behind in Afghanistan was a well-designed strategy on the part of the Pentagon and its masters, the Evil Globalist Bastards?  With all those state-of-the-art weapons in the hands of Taliban berserkers right next door, Russia has yet another outside threat on its borders to contend with in the Great Game.  And NATO just flooded Ukraine with high-tech missiles on Russia's border too.
But who the freak is paying for all these childish war games?  The globalist gamers?  Uh, no.  American taxpayers are ultimately responsible for the Evil Globalist Bastards' mega-XBox gamer fun -- that could blow us all up.

Why does the British government's mortality graph go up in a symmetrical straight line?  It should be more scatter-shot, right?  https://jdee.substack.com/p/dying-with-precision-causal-vs-co

And then there's Libya.  Americans should be truly ashamed.  https://off-guardian.org/2022/01/12/the-narrative-and-reality-of-the-libyan-crisis/

This morning I was tidying up my apartment and stumbled across an old dog-eared journal that I'd written back when I was in the Peace Corps in South Africa in 2007.  Here's a quote:
"How can you tell if someone has AIDS," I asked a friend in Motswedi, the village where I was stationed.

"Their flesh wastes away," she answered.  "Look for sunken-in faces -- and also their bottoms disappear."  So now I'm all getting myself in trouble here in the village these days by staring at men's butts on the street....
Back when I was living in Motswedi, many of the grandmothers in my village were raising orphan children whose parents had died of AIDS.
How tragic.
What a lie.

Last night on the evening news, some well-paid TV anchor showed us actual videos of Americans actually bragging that they had just sat in their cars for seven freaking hours, engines running, while they waited in line for their COV$D antigen tests.  Seriously? 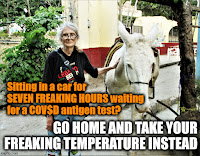 These people coulda just bought a freaking thermometer and stayed home.  Or they coulda shelled out $40 on Amazon for one of those fingertip oxygen-meter thingies like they use at your doctor's office.  Your temperature goes up?  Your oxygen levels go down?  Stay in bed, take lots of vitamin C and D and drink plenty of water.  Take a freaking aspirin.  Monoclonal antibodies.  Even the dread Ivermectin and HCQ.  Use common sense.  Early treatment saves lives.
But even if we do get COV$D, now we gots the perfect excuse to spend the day in bed and avoid disingenuous relatives.
But what if your employer or school requires a negative test score?  Catch 22?  Tell 'em to shove it.  If three million Americans finally stop being gullible, there's not much those toadies can do.
Americans have their hair all on fire over "Cases!  Cases!  Cases!" as they pray to the Pharma gods that yet another booster shot will save their freaking lives.  No it won't.  This is a pandemic of the vaccinated.  No place to hide.
Getting another booster shot soon, Bucko?  Have your EpiPen ready -- and your life insurance policy paid up.
Critical resources that have been censored by Big Pharma:
Life insurance companies are reporting a 40% increase in American working-class all-cause deaths recently -- even after everyone got The Jab:  https://justthenews.com/nation/states/indiana-life-insurance-ceo-says-deaths-are-40-among-people-ages-18-64
Laughter is the best medicine.  I'm not the only one who has fun with memes:  https://off-guardian.org/2022/01/01/23-covid-skeptic-memes-to-kick-off-2022/

From the legal perspective, there's enough criminal activity by Big Pharma to "dismantle the entire vaccine industry" -- and yet the muggles dream on.  http://thoughtcrimeradio.net/2021/12/reiner-fuellmich-new-findings-enough-to-dismantle-the-entire-vax-industry/?ISCI=031102&fbclid=IwAR3lh7TXZX-Ml0tRpi3lbb5fqa4F2RDYGY3IZMufjCVXxsiQYyqtCQbW9R0
And Joe Rogan is on a roll!  https://www.youtube.com/watch?v=61XO3xkkfew
You want real-time data?  Brace yourself:  https://jessicar.substack.com/p/the-shortcoming-of-the-repeat-dose
_____________________________

People are gonna hate me for this one

but I just couldn't resist.  People definitely need a sense of humor these days (Day 657 of the Evil Globalist Bastards' useless, worthless, fascistic and scary Lock-Down): 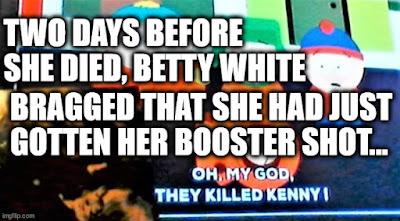