Here I am in Amman, Jordan -- staying at a cheap hotel that only costs $21 a night.  But it's safe and has functioning plumbing, a bed, a card table, several electrical outlets, free breakfasts and an owner who is totally nice -- plus the guy in the room next door appears to have a fabulous sex life.

And there are no bedbugs.

But being in Amman is also extremely frustrating from a tourist's point of view.  Why?  I'll tell you why.  The ancient pre-Roman city of Petra, a UNESCO World Heritage Site that will totally knock your socks off, is only a three-hour car ride away.

The Syrian border is only 45 minutes away by car -- but it might as well be on the moon  thanks to ISIS and its BFFs in America, Turkey, Israel and Saudi Arabia.  https://medium.com/@An0nKn0wledge/history-of-cia-attempted-coups-in-syria-and-how-they-created-isis-1256d3e880d6

And the border between Jordan and Palestine is only 45 minutes away too -- and once you're on the West Bank, it should only be an hour's drive to Bethlehem or to Jenin, Ramallah, Jericho or wherever.  Jerusalem itself is practically right around the corner from Amman as the crow flies.  Hell, even Gaza is not all that far away from where I sit in my hotel room right now.  It's probably even closer than Petra.

But by the time one crosses a very stern border and goes through tons of checkpoints and deals with Israel's all-pervasive Occupation bureaucracy and the IDF's whole super-militarized tap dance, one coulda just hired an Uber and driven to Petra three times over -- and with 87% less aggravation and at one-tenth the price.  It would be like as if you had to pass through five different checkpoints to get from north Berkeley to south Berkeley -- and not get pissed off while doing it.

Plus right over from Jordan in the other direction lies Iraq.  There's even a big green sign on the freeway from the airport that reads "Next Exit:  Saudi Arabia and Iraq".  And Yemen isn't that much farther away either.  Even Lebanon and the Golan Heights are within driving range of my hotel. 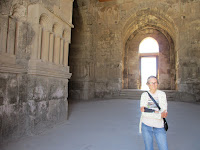 The whole heart of the entire freaking Middle East is not much bigger than the greater San Francisco Bay Area, and it sometimes seems like the only real difference between the two is that the Bay Area doesn't have colonialism, imperialism and the CIA to tie everything all up in knots.  Yet.

PS:  I'm still wallowing in the miry swamp of jet lag.  Haven't slept more than six hours in the past four days.  Oh well.  "Sleep when you're dead".  Plus once I got past a certain tipping point, I don't appear to need any sleep at all.  But then neither do zombies.  But I digress.

PPS:  Yesterday I visited The Citadel, Amman's most famous ruin.  And located there, right next to each other, were ancient Neolithic ruins, ancient Roman ruins, ancient Byzantine Christian ruins and ancient Islamic ruins -- all in one place.

The moral here?  Apparently we humans have all gotta be in ruins before we can finally learn to get along.