Zionists vs. Bedouins: Losers take all.

Over a century ago, a handful of wealthy Zionists got together and came up with a plan to beg, borrow or steal a "Jewish State" somewhere -- but where?  Their first three choices were South America, Africa and the Middle East.

They must have tossed a coin to make their decision and the Middle East must have won -- or perhaps "lost" might be a better word to use.  In any case, Lady Luck appears to have made a very big mistake here.  Why?  To find out you gotta look at history.

Thousands of years ago, wandering traders called Nabataeans pretty much controlled a whole bunch of the Middle East.  Even King Solomon and Alexander the Great couldn't get them to budge.  They also built a legendary capital city -- Petra.   Nabataeans also served as the prototype for modern-day Bedouins.

Then along came the Brits and the French, and they used their superior military firepower to divide the Middle East into arbitrary "nations" -- but the people there had been Bedouins for too long and the European late arrivals soon discovered that getting them to stay inside of these arbitrary "nations" was like herding cats. 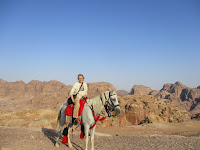 And then the Zionists also invited themselves to the party.  "This land is mine," they declared, "and we have the nukes to prove it."

But still even to this day, the Bedouins still just keep wandering around the Middle East like they have done for the last 4,000 years -- even despite all those neo-colonialist carpet bombings, tanks, F-16s, napalm, DU, concentration camps, occupation, war crimes and torture.  Even despite all these decades of neo-colonialist cruelty, the salt-of-the-earth Bedouins still have their horses, their camels, their trade routes, their tribes, their Ford 150s, their slingshots -- and their will to survive.

Even after over a century of being invaded by Brits, Turks, Zionists, Saudis, Frogs and Americans, the Bedouin are still taking care of business.  It's like the old story of the tortoise and the hare.  In the long run, my money is on the Bedouin.  Still don't believe me?  Just ask the ancient Romans, Greeks, Israelites -- and of course Ozymandias.  "Boundless and bare, the lone and level sands stretch far away".

And the biggest irony yet?  According to Google, both the ancient Israelites (not to be confused with the current Israeli neo-colonialists of European origin BTW) and the ancient Nabataeans have all sprung from the very same people, all originated in the very same place.  Where?  Wait for it?  YEMEN!  Yes indeed.  Both of these wandering tribes have their roots in the very same country that Israeli, American and Saudi neo-colonialists are currently working so very hard to destroy.  Yemenis are their homies!  https://thetyee.ca/Opinion/2017/08/23/House-of-Saud-Cholera/?utm_source=daily&utm_medium=email&utm_campaign=230817

PS:  Speaking of Bedouins, I just met one personally and he guided me all through the ancient Nabataean city of Petra -- on his horse, in a genuine Bedouin outfit reminiscent of Captain Jack Sparrow or Indiana Jones (if nothing else Bedouins are flexible -- and they too watch TV).

Ahmed, aka Captain Jack, was born in a cave, rides a white horse and guides tourists around Petra for a living.  He taught me how to paint my eyes with kohl to prevent sun damage, showed me some awesome Roman ruins further up the road, demonstrated Bedouin hookahs, took me to a Byzantine monastery by donkey-back and introduced me to beautiful Petra at sunrise.

He also gave me a small glimpse into the hard and determined life of the Bedouin and their strong will to survive.

The Zionists may have nuclear weapons as well as America, banksters, industrialists and even "God" on their side -- but I'm still gonna place my bets on the Bedouin.  I'm gonna bet the farm that in another thousand years from now, long after the Zionists have moved back to Hollywood, Bedouins will still be following their historic trade routes all across the Middle East.

Zionists should have chosen South America or Africa instead.

PPS:  If you ever find yourself to be a tourist in Petra any time soon, please be sure to ask for a guide named Captain Jack -- and tell him that Jane sent you.  Or else you can tell him yourself -- like most Bedouins, he too has a FaceBook page https://www.facebook.com/petra.wolf1992.

And also, while you are in Petra, please stay at the My Home Hotel -- just 10 dinars a night (that's the equivalent of 15 US dollars -- dollars used to be worth a hecka lot more on the international monetary market before the RepubliDems screwed stuff all up).  https://www.agoda.com/my-home-petra/hotel/petra-jo.html?cid=-218