Wet Supremacists: Why moving the US embassy to Jerusalem is a good idea


Don't get me wrong.  I really do believe that Americans need to finally stop kowtowing to Zionist corruption and influence-peddling and, yes, I still continue to think that Zionists are war-mongering White supremacists who are doing Judaism all sorts of harm.  And for this reason, I totally object to moving our U.S. embassy away from Tel Aviv.  But there is an even bigger issue to consider here -- that it's never a good idea to waste American taxpayers' money on still maintaining a U.S. embassy in Tel Aviv, a city that is pretty much doomed.  https://ahtribune.com/us/2932-israel-lobby-rebuts-omars-claims-about-its-immense-influence.html

"But why is that?" you might ask.  "Seems counter-intuitive.  Isn't half the world already pissed off that Trump, the Zionists and AIPAC are trying to politicize three of the world's greatest religions by moving the Zionists' capital to Jerusalem?"

Sure, there is that.  But new data has also come to light.  I'm currently reading Dahr Jamail's scary new book, The End of Ice, and he says that the last time our planet had such a high rate of carbon dioxide in our atmosphere as it now does, sea levels all over the world rose 130 feet.  However, with methane gas being steadily released in the Arctic, the sea levels will rise even higher.  And if there is a sudden large methane-release event, which is entirely possible, only one in seven human beings will be left after that.  If we're lucky.

But assuming that sea-levels will only rise 130 feet in the not-too-far-distant future, it will still be "Bye-bye Tel Aviv."  Tel Aviv is only 16.4 feet above sea level.  American diplomats would have a far better chance of not having to swim for their lives if they were in Jerusalem (2,474 feet).  Makes sense to me. 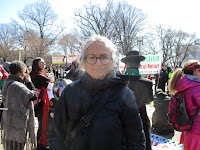 Unless the Mediterranean Sea is going to get blocked off at Gibraltar in the near future, Tel Aviv is gonna be the new Atlantis -- right up there with the Vatican (63 feet).  And even Mecca (909 feet) could still be up for grabs by the Red Sea.  Only the Buddhists in Tibet (11,995 feet) will be absolutely safe!  Perhaps Israelis and Saudis should spend more time worrying about how to keep their countries from drowning and less time worrying about how to keep murdering babies in Yemen and Gaza.

Actually,  we should not even have an embassy In Jerusalem in the first place.  Those Zionists are mean.

The moral of this story?  That we all need to wake up to the fact that America's real enemies aren't Syria, Venezuela, Iraq, Afghanistan, Yemen, Libya or even Native American water protectors, heartland anti-frackers or Alaskan ecologists.  America's real enemy is the fossil fuel industry.  And hopefully it's not too late to do something about that.
https://www.nybooks.com/articles/2019/04/04/future-without-fossil-fuels/

PS:  Let's not forget that Washington DC (zero feet) will also be underwater soon too.  But then isn't the District of Columbia a Swamp already?

PPS:  I'll be in Washington to protest at the AIPAC convention next week.  Wish me luck.  Perhaps Ilhan Omar will be on the picket line too!   Or even A.O.C.  But I'll definitely not run into Kushner or Trump on the picket line however.  Bet ya anything they're be inside the AIPAC conference itself, selling America out. https://israellobbyandamericanpolicy.org/

Posted by Jane Stillwater at 3:08 PM


DC's sleazy [bomb] shell game: Bad guys get the money but we get the debt

What would you do if some felonious bad guy stole your credit card and used it to buy a bazooka, an AR-15 and 20,000 rounds of ammo?  Would you be pissed off?  My guess would be yes -- especially when you were driven into bankruptcy as a result.

Now imagine that something like this happens to a country instead of to you -- perhaps a country named America.  "But that can't possibly happen here," you might say.  Wrong answer.  It already has.  Sleazy bad guys up on Wall Street and down in DC have already stolen our credit cards and hit up our ATMs.  And then, with our precious life-savings grasped firmly in their hot little hands, they ran out and bought twenty-one (21) trillion dollars worth of RPGs, F-16s, border Walls, drones and atomic bombs.

And when America goes bankrupt?  Will it be the sleazy bad guys who suffer?  Not at all.  It will be me and you.  The bad guys will have armies to protect themselves -- armies weaponized by you and me.  And we will have nothing to show for our lives but the shirts on our backs, if that.  It's a shell game.  We've been conned.

So what can you and I do change our sorry fate regarding this lame and dangerous situation?  Let's evict all those creeps in Washington from power.  Let's vote them all out before it's too late -- if it's not too late already, that is.

According to Forbes Magazine, the Denver Post recently "confirmed that the Department of Homeland Security has issued an open purchase order for 1.6 billion rounds of ammunition.  As reported elsewhere, some of this purchase order is for hollow-point rounds, forbidden by international law for use in war, along with a frightening amount specialized for snipers.  Also reported elsewhere, at the height of the Iraq War the Army was expending less than 6 million rounds a month.  Therefore 1.6 billion rounds would be enough to sustain a hot war for 20+ years.  In America."  https://www.forbes.com/sites/ralphbenko/2013/03/11/1-6-billion-rounds-of-ammo-for-homeland-security-its-time-for-a-national-conversation/#71f7d734624b

"But how do we even know who to vote against?" you might ask next.  That's easy.  Stop voting for politicians who have low self-esteem.  Why?  Because people with low self-esteem always go for instant gratification for themselves instead of for long-term benefits (to the American people).

"But how can we tell if someone has high self-esteem?"  That's easy too.  According to psychologist David J. Lieberman, someone with high self-esteem tends to be moral, to treat both themselves and others with kindness and dignity, and isn't afraid to tell the truth.  Only folks with very low self-esteem go around blowing other people up -- so always vote for peace candidates (such as Tulsi Gabbard).  https://www.antiwar.com/blog/2019/03/05/rep-tulsi-gabbard-on-regime-change-wars/

PS:  I'll be going to Washington DC on March 22 in order to attend a conference focusing on AIPAC's effect on America's foreign policy.  And you just know that AIPAC's members have low self-esteem -- by the way they treat Palestinians, our own American democracy and our elected representative Ilhan Omar.  Good grief, I wish that Rep. Omar would be speaking at the conference.  I'd stand up on my chair and cheer!  https://israellobbyandamericanpolicy.org/

Posted by Jane Stillwater at 2:23 PM


Breaking up together: Is Venezuela the new Honduras?

Here in Berkeley, you can meet all kinds of people -- people from all over the world.  I even know someone who is visiting here from Venezuela.  "Yo tengo miedo," she told me yesterday.  "I am afraid."  Afraid of what?  "I am afraid of all those thousands of refugees coming up here to America from Honduras!"

Yeah, but....  "They really aren't people you should be afraid of," I reassured her.  "They are only trying to find a safe life for their children.  Don't worry about them." 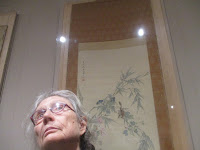 "It's not them that I'm worried about," she replied.  "It's America that scares me.  The American militaria y CIA went down to Honduras and mercilessly broke that country apart like it was a piñata.  They broke it.  And then Hondurans had no choice but to scatter like ants.  And now the Gringos are about to break Venezuela too."  I was starting to see her point.  https://nakbatour.com/

"And if that happens, yo tengo miedo that thousands and thousands of Venezuelans will be forced to become refugees to here as well!  With their babies taken away.  Dying in Border Patrol prisons!  Leaving my country shattered and broken just like Honduras!"  https://www.npr.org/2019/02/22/696057482/trumps-venezuela-moves-follow-long-history-of-intervention-in-latin-america

What could I say?  What could I do?  Food always helps!  So I took her up to Telegraph Avenue and bought her a burrito at Sinaloa Tacos and then we went to the movies.  Saw Green Book.  "Venezuela is safe." I reassured her.  "The Honduras nightmare will never happen there.  Venezuelans will not allow America to use their country like a freaking piñata too.  There will be no flood of refugee caravans coming up here from Venezuela."

Stop Wall Street and War Street from destroying our world.   And while you're at it, please buy my books.  https://www.amazon.com/Jane-Stillwater/e/B00IW6O1RM
Posted by Jane Stillwater at 12:56 PM