Grilled: My experience at the Israeli border

There are chickens outside my window right now -- but they are not Israeli chickens.  They aren't even Palestinian chickens either.  Long story.  Bethlehem was my original destination.  But then I got side-tracked for a while.

At the border between Jordan and Israel/Palestine the other day, I handed over my passport to a sweet-looking 20-something Israeli border guard.  She did not give it back.  I waited an hour.  "Can I please have my passport back now?" I meekly asked a few times more -- long after almost everybody and his brother who came on the bus with me had already passed through. 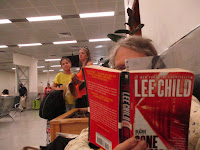 I waited another half-hour, asked a few more times and then finally went off to the freaking office myself.  "The computer's down," they told me at the front desk. What?  They want to run my name through a computer now?  Now it's beginning to sound a bit too much like Big Brother.  But still, I bet they won't have to search very far.  I've been on some weird hyper-Zionist's radar a lot lately and he's been threatening to use his influence in Israel to get me banned there.  Apparently Israel is a democratic country -- just as long as you don't practice free speech.  But maybe he's Netanyahu's new BFF?  If so, I'm screwed.

At that point, however, this really nice young woman and this really nice young man popped up from out of nowhere and started to lead me off into the bowels of the office's inner sanctum, a warren of small interrogation rooms in the back.  "This is bound to end badly," I thought to myself, seriously considering grabbing onto a door frame, shouting "Attica!" and refusing to move.  But I didn't.

"We'll keep an eye on them."  I just bet that you will.  But the really nice young man appeared to be non-threatening, friendly and having only my best interests at heart -- plus did I really have any other choice?

Next they herded me into one of their many interrogation rooms where a friendly-looking detective-type was seated at a computer -- maybe like that guy on CSI?  And he started asking me questions.  "Are you here to be in a demonstration?"  Er, no.

"I'm here to go to Bethlehem and have a nice chit-chat with Jesus."

"Have you ever been in any demonstrations before?"  Well, sure.  I'm from freaking Berkeley.  What do you think.  MLK, Vietnam, 1960s stuff.  Homelessness, ICE, that illegal Syria invasion, neo-Nazi White supremacists, modern stuff.

"Do you know about ISM?"  The International Solidarity Movement, Rachael Corrie's group?  If I say yes, will they run me over with a bulldozer too?

"Yes, I do," I replied.  "And I also know about AIPAC."  Couldn't resist throwing that in.  But then I noticed a tiny video camera on the desk that was pointed straight at me.  Oh goodie!  Now I'm gonna star in a IDF training film?  Gave it a little finger-wave.

"Give us the names of any Palestinians you know."  Hmmm.  Let's see.  There's that guy who owned a grocery store back in Berkeley.  I used to buy sandwiches there....

"What do you do for a living?"  Now I was really starting to feel intimidated.

"What is this all about?" answering a question with a question.  "Can I have my passport back so I can get to Bethlehem before dark?  Know any cheap hotels in Bethlehem?"

"Why do you want to come to Israel?  Do you know any Lefties here?"  Hell, I myself am a freaking Lefty.  "And I also know Righties too.  Trump is a Righty.  Netanyahu is a Righty.  And he dresses funny too."

"Give us some names of people you know."

"My parents were Righties.  That's why I became a Lefty.  And speaking of family, did my children put you up to this?"  Then I told him the whole sad story about how my kids owed me money and then how I had worked as an actor in student films and how nobody loves me and my knees hurt and I was hungry and....

It was like pouring one's heart out to a shrink.  But the good part was that after a couple of hours spent grilling me, they did bring me lunch.

"Now.  How many Palestinians do you know."  Asked and answered.  "Can we see your Facebook page?"  Sure.  Who wouldn't want Mossad to look at their FB page?

"There are some things that I really like about Israel -- but I really do hate the neo-colonialism of its rulers," I babbled on.  The guy was a good listener.  I'll give him that.

Then he started telling me about my previous trip to Israel ten years ago -- and that's when I realized  that he already knew everything about me already.

"Well, thanks for the lunch and everything but I really gotta get going.  If you would just give me my passport back?"  He smiled.  I smiled.  The really nice young woman smiled.  The really nice young man smiled.  We were all totally Kumbaya.  "I'll be sure to say hello to Jesus for you when I get to Bethlehem," I said after gathering up my stuff.  We practically kissed each other goodbye.  It was definitely a moment.

But apparently they let an underling do their dirty work.  "Sign here, please."  What's this?  "You have been denied entrance to Israel."  On what grounds?  "You are a security risk."  And sure enough.  "Entry Denied" had been stamped on my passport.  Eight hours of my life that I will never get back.

Guess the moral of this story is "There's no such thing as a free lunch."

But if they had actually let me go on to Bethlehem, I would have been totally won over by them and maybe even re-thought my currently-low opinion of Israeli war-mongering, human-rights violating, bullying, neo-colonialism and general tyrannical behavior.  Plus I would have helped grow their economy by spending money in Bethlehem too. As it was, however, they had just managed to piss me off.

And now I'm going to go spend all my tourist dollars (such as they are) in Petra instead.  Humph.  I've already been to Bethlehem anyway.  Jesus already knows how I stand on truth, justice and "do unto others."  But the trip wasn't actually a total waste.  I still had the remains of my lunch and ate them for dinner when I finally got back to Amman.

Stop Wall Street and War Street from destroying our world.   And while you're at it, please buy my books -- thus helping me support my addiction to Justice and Truth.  http://straitwellbooks.blogspot.com/2016/04/our-top-best-seller-right-now-is-bring.html
Posted by Jane Stillwater at 1:12 AM