Of all the countries affected by 9-11, America has been hit the absolute worst -- but not in the way that most Americans still think.  According to David Ray Griffin's new book "Bush and Cheney: How They Ruined America and the World," It wasn't the Twin Tower bombing that screwed us Americans royally.  It was the war-mongering anti-democratic racist corporate-owned police state that we've been stuck with as a result. http://jamesfetzer.blogspot.com/2017/07/david-ray-griffin-bush-and-cheney-how.html

In any case, I am currently hanging out at one of the ultimate Seven Wonders of the modern world (according to UNESCO -- honest, I didn't make this stuff up!)  Petra by moonlight?  One of the most amazing sights you could ever see in your life.  An adventure in esthetic fabulousness for sure.  Bucket-list awesomeness!

Plus I got to ride horseback through it all and escorted by an extremely handsome Bedouin guide.  Rudolph Valentino, eat your heart out.

There's a blurb inside the Petra museum stating that the people who built Petra were lovers -- not fighters.  They believed in diplomacy above all.  Well, not exactly above everything else.  They believed in Art for Art's Sake even more.  "If it isn't beautiful, then don't waste our time," appeared to be their motto.  These were my kind of people!

America spends trillions of $$$ on weapons and war every year.  The Nabataeans who built Petra would have been totally shocked.  "What a waste of time and money," they would have said, "when you could be painting or playing music or carving in stone instead."  I gotta agree with them there.  After all, what have all its many nefarious, perfidious, immoral and downright slimy "wars" achieved for Americans today?  Plus everyone all across the planet hates us and fears us -- among other things (see above).

The American military-industrial complex seems to have mistaken anger and fear for beauty and love.  Not the same thing, guys.  Get real.

Anyway, here I am in beautiful Petra, hanging out with Bedouins and feeling very very very lucky.  Are you also feeling that lucky too?  Or just lied to, threatened and over-taxed?  But I digress. 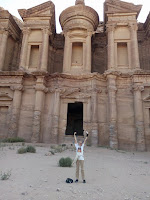 On September 11, 2001, we all know what happened (or at least we pretend that we do).  And I've already mentioned some of the rotten stuff that has happened to us since then.  Plus all those billionaires created by weapon sales, millions of people needlessly slaughtered in the Middle East and America's economy in shreds.  Iraq, Afghanistan, Libya and Syria are in shreds too.  But Petra, in Jordan, is also a victim of 9-11.  Petra's economy is in shreds as well.

"We used to have 5,000 people a day come and tour Petra," one of the locals just told me, "but now we are lucky if 500 a day show up."  At one of the seven most beautiful sights in the world?  Only a very few tourists are showing up?

Get a life, Americans.  Stop being so fearful.  Come to Petra!  Jordan is perfectly safe.  Get on over here and see for yourself.  I recently met a man who moved back to Jordan within 48 hours after his convenience store in Chicago suffered its second armed robbery in a month.

And today at 5:00 am I walked down the main street of the town surrounding Petra.  Safe as houses.  Can you do that in your home town in America?  I love Petra.  Americans, please stop being such wimps and come visit.

Bottom line:  America has never been the same since 9-11.  But it doesn't have to be that way.  We need to get some art and beauty back in our lives -- and Petra has enough to go around for all of us.