Travel Advisory: Houston is all hat, no cattle

Don't you just hate it when they name American airports after Republican carpetbaggers?

As far as I'm concerned you can name every airport in the whole freaking world after JFK.  But to name an airport after John Foster Dulles?  Really?  The man was a scallywag and a traitor -- not a shining example to set for our children at all.  https://consortiumnews.com/2015/10/27/checkmate-on-the-devils-chessboard/

Then there's the Ronald Reagan airport.  Huh?  That man was personally responsible for the murder of 400,000 Mayans and the looting of our national treasury too.  What?  America's gonna have a Charles Manson airport next?  Or one named after Bernie Madoff? 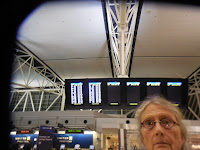 The other day I flew into the George Bush International Airport in Houston -- and that's a part of my life that I can never get back.  Bush Senior or Bush Junior?  It doesn't matter which one.  Both of them sold America out to Wall Street and War Street.  Both of them claimed to be Christians and yet murdered their way through the Middle East in a manner that would have embarrassed Attila the Hun.  I wouldn't name an airport after their dog.

So I get to my motel room in Houston and try to get some sleep before my flight out the next day.  No luck there at all.  But what can I expect from a town that names its airport after George Bush.  Perhaps it was the ghosts of all those American soldiers who died violently in all those useless and bloody Bush wars-for-profit that kept me awake.

So I tried counting sheep.  Took a homeopathic remedy for sleeplessness.  Walked around the block in my bunny slippers at 2:00 am.  Listened to classical music.  Took another hot bath.  Recited the Pledge of Allegiance backwards.  Read the Gideon Bible.  Drank herbal tea.  Nothing.  Still wide awake.

And, yes, I did catch my flight out the next morning -- but with zero hours of sleep.  Houston had utterly defeated me.  All hat, no cattle?  All sheep, no sleep.

But I'm warning you, Houston.  You've defeated me once -- but I'll be back!  And please change the name of your airport while I'm gone.

And meanwhile you and I try to be polite, be kind to our neighbors, never break the law -- and worry about spending just ten dollars to take the kids out to McDonalds for dinner.  But if we truly want to live in a peaceful world and be financially secure too, how can we possibly compete with the kind of bucks that the military-industrial complex churns out in "fake news" propaganda alone?  https://consortiumnews.com/2016/12/28/escalating-the-risky-fight-with-russia/

Our only hope is knowing that our possession of the moral high ground is priceless.