The Oakland warehouse fire: Death comes at any minute

I just heard the tragic story of ten friends who were looking for something fun to do on a Friday night -- after a long week at work.  They began texting back and forth.  "Hey what about going to that show at the Ghost Ship warehouse in Oakland tonight," texted one musically-inclined friend.
"Sounds good to me," another friend texted back.  "I hear it's gonna be fun -- plus I love that venue".
"Count me in," said the third friend.  She lived in San Francisco and didn't want to miss a chance to meet up with her friends from Oakland.
Then another member of this tight group of friends who had known each other since college said that she wanted to go too.  "But I may be late.  Can't get away until 10 pm at the earliest.  Dinner with neighbors."  Three more friends also committed to another fun evening at the legendary Ghost Ship.  The interior of the old warehouse had been set up to look like some sort of fairyland -- plus you could get really close to the shows.  http://sfist.com/2016/12/03/pre-fire_photos_from_inside_oakland.php#photo-4
But then things started to come up, you know how that goes, and pretty soon there were only three friends still committed to going to the Ghost Ship on that fateful Friday night -- and one of them wouldn't get there until almost midnight.

How come two of these friends are now sadly gone from this mortal coil forever while the other eight are grieving with their whole heart and soul -- but alive.
Moral here?  Always follow your dreams.  Why?  Because Death is never very far behind you, always breathing down your neck.  You never can tell when your last day on Earth will be.
Whether you were in that Ghost Ship in Oakland that just burned to the ground, or that Ghost Ship in Syria infested by ISIS ghouls armed with weapons made in the USA, or in that Ghost Ship on Pennsylvania Avenue in Washington DC (and, no, it doesn't matter if you are Donald "Wall Street" Clinton or Hillary "War Street" Trump) http://russia-insider.com/en/big-media-lying-through-its-teeth-aleppo/ri17990  Or even if you are lucky enough to have access to those Ghost Ship bunkers that the Deep State owns under Wall Street -- Death will always be breathing down your neck.
Always. 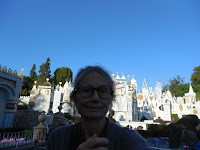 PPS:  And on a very much lighter note, I was shocked to discover that Disneyland has pretty much killed off "Small World".  You get into those little boats and are happily expecting peace-loving munchkins to be singing their cheerful, hopeful and timeless theme song -- and instead they are now screeching out a canned version of "Jingle Bells".  Consumer Alert:  Hardly worth standing in line for.

Stop Wall Street and War Street from destroying our world.   And while you're at it, please buy my books!  http://straitwellbooks.blogspot.com/2016/04/our-top-best-seller-right-now-is-bring.html
Posted by Jane Stillwater at 7:53 AM