"You must not lose faith in humanity," said Mahatma Gandhi -- and yet I have lost mine.

On Good Friday, 2018, hoards of Israeli snipers deliberately took aim at nonviolent protesters marching in Gaza -- and then fired at will.  https://www.facebook.com/walidmahmoudd/videos/1823164944423051/

It was a deliberate massacre, worse than Parkland, like shooting fish in a barrel, cold-blooded murder.  15 dead so far and a thousand wounded as the unarmed men, women and children of Gaza, the world's largest concentration camp, vainly sought shelter. 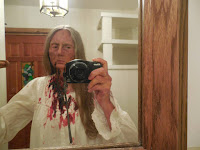 It was like Martin Luther King's rag-tag band of heroic protestors as they fought against the American South's  brutal, bloody and unjust caste system that we ourselves let go on so long.  https://www.amazon.com/Warmth-Other-Suns-Americas-Migration/dp/0679763880

It was like a Roman crucifixion on Good Friday or like Bloody Sunday in Derry.  How can we ever have faith in humanity again?