When I was a kid, I was totally fascinated by the Donner Party.  How could they possibly do that?  Eat their own kin?  And if I had been in their shoes, would I have eaten my fellow Americans too?

"But Jane," you might ask, "What does cannibalism have to do with GMOs?"  Isn't it obvious?  You are what you eat.

Right now, more and more of my fellow Americans are starting to eat gluten-free.  Me too.  No more croissants, birthday cake or apple pie for us.  Rats.  However, if I was stuck in the High Sierras in the middle of winter with only chocolate-chip cookies and cheese danishes to eat, would I have been tempted to eat them too?  Perhaps?  Maybe?  Yes!  But my stomach would have grumbled and my gut would have complained. 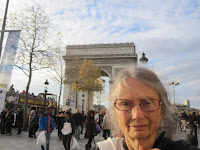 We all know why the Donner Party switched to cannibalism.  But does anyone know why suddenly so many Americans are now switching to gluten-free diets?  Here is my theory, based on solid research.  My son Joe never eats wheat.  Never.  Not even in soy sauce or beer.  But when he went to Paris this summer, he discovered, to his amazed delight, that he could safely eat wheat again while over there.  Wow.  How's that for research!

So.  What's the big difference between French wheat and American wheat?  GMOs!  France has banned GMOs.  There's the true smoking gun.  The cards are all stacked against us by Monsanto and friends.  I rest my case.  http://www.reuters.com/article/us-france-gmo-idUSKCN0RH1BV20150917

Guess we really are what we eat.

PS:  And speaking of smoking guns, that reminds me of America's current lousy choice between guns and butter.  If the American military stopped their farting around in the Middle East and making a big muck of things over there in order to keep the oil companies happy, then we'd all have enough money back home here to even build Donald Trump's precious Wall -- or else to even buy things that really matter to us personally instead of the usual tanks, guns and bombs.  https://consortiumnews.com/2016/08/24/the-bogus-humanitarian-war-on-serbia/

We could even clean up all the flood horrors in Louisiana with that huge amount of cold hard cash.  https://richardfalk.wordpress.com/2016/09/03/clinton-versus-trump-how-it-might-matter-for-the-middle-east/

Moral of the story?  You can't eat bombs -- not even GMO bombs!  https://www.sott.net/article/325238-Western-corporate-media-disappears-over-1-5-million-Syrians-and-4000-doctors#

PPS:  And speaking of Louisiana, I'm leaving for New Orleans on September 14, to attend the annual BoucherCon convention for murder-mystery writers and readers, "Blood on the Bayou".  Perhaps I'll see you there too, trying to resist the GMO-enhanced muffalettas and beignets.  http://www.bouchercon2016.com/