Boy did I have fun in New Orleans this week -- at a convention for murder-mystery readers and writers being held in the French Quarter.  http://www.bouchercon.com/  I ate muffuletta sandwiches, muffuletta salads and muffuletta-flavored mac-cheese (an idea whose time has definitely come).
Then I ate beignets, danced my way into two Mardi Gras parades and got my fortune told by a gypsy in front of the St. Louis cathedral.  "You will come into riches soon and you are popular and happy."  Yeah right. 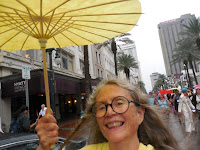 Then I lost ten dollars in the slot machines at Harrah's, went to a fabulous book-signing after-party hosted by publisher Soho Crime and chatted with Soho authors Lisa Brackmann, Cara Black, Henry Chang, Stewart Neville, Ed Lin and Kwei Quartey -- while reading a Peter Lovesy murder mystery at the same time.  Any mystery novel published by Soho Crime will keep your pages turning for sure.  https://sohopress.com/soho-crime/
But then I did something really spooky -- went to the French Quarter's infamous Museum of Death.  It basically offered viewers a running record of all America's serial killers, weird death practices, morbid fascinations with dead bodies and love affairs with War -- definitely not for the faint of heart.  http://www.museumofdeath.net/nola
Which instantly reminded me of America's current endless war on people who happen to live in the Middle East (and almost everywhere else in the world too) -- America's very own Museum of Death.  And this special all-American museum's admission price is only five (5) trillion dollars!  What a steal.  https://theintercept.com/2016/09/14/latest-estimate-pegs-cost-of-wars-at-nearly-5-trillion/

And after looking over the real-life American museum of death's future expansion plans that involve nuclear bombs, police militarization, fracking, wars on minorities, climate change and anti-Russian false propaganda, it appears that America also plans to put you and me in its Museum of Death too -- just as soon as it possibly can.  http://www.globalresearch.ca/we-are-the-new-nazis/5546623

And here's even more good news for America's military-industrial serial killers.  Gaza is no longer the world's largest open-air prison -- or even the world's largest open-air death row either.  Now Yemen owns that dubious distinction.  And here's even better news for American fan-boys of blood and gore:  Somehow American taxpayers have been conned into paying for this endless supply of electric chairs, gas chambers and jails for both Gaza and Yemen.  http://www.informationclearinghouse.info/article45485.htm
According to a friend of mine who has family members still trapped in Yemen, "My mother's city is the only one in Yemen that has only been bombed twice by Saudi F16s.  For this reason, refugees from all over Yemen have come there for sanctuary and are living in the streets, schools and anywhere else they can find.  The refugees' conditions are horrible there -- but at least they are still alive."  So far.

All that American/ISIS serial-killing going on in Syria is also sick too.  According to Gerry Condon, vice-president of Veterans For Peace, "Almost everything we read about Syria in the US media is wrong.  The reality is that the U.S. government is supporting armed extremist groups who are terrorizing the Syrian people and trying to destroy Syria's secular state.  In order to hide that ugly reality and push violent regime change, the U.S. is conducting a psychological warfare campaign to demonize Syria's president, Bashar al Assad.  This is a classic tactic that veterans have seen over and over.  It is shocking, however, to realize how willingly the media repeats this propaganda, and how many people believe it to be true."  http://mltoday.com/article/2514-us-peace-delegation-to-syria-reports-back/91

And to quote Oliver Stone, "Americans are not under threat.  Americans are the threat."  http://www.globalresearch.ca/oliver-stones-american-history-were-not-under-threat-we-are-the-threat/5546363

But other than that, New Orleans was to die for!

PS:  Here is a link to journalist Vanessa Beeley's extensive report on what is really going on in Aleppo and Syria these days.  After reading this, we Americans ought to be so ashamed to be Americans that every single one of us will sit down during the national anthem.  First we fought the Nazis -- and then we became them.  http://www.mintpressnews.com/journey-to-aleppo-exposing-the-truth-buried-under-nato-propaganda/220563/