Do Latino immigrants really steal all of our jobs?  Are Black people really the source of most crime in America?  No, no and no.  Of course not.  Most of our missing jobs have been stolen by global corporations that are still bedazzled by outsourcing and Reaganomics.  And America's true super-criminals are 99% White. 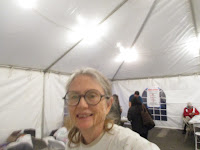 After I finished volunteering at a Red Cross shelter in Chico that had efficiently geared up to house hundreds of the survivors of the recent Paradise fire, I went off to wander around Chico itself, a sweet university town famous for its small Craftsman-style homes.

Near Chico's public library, however, I got distracted from my tour by a toothless skinny seriously scroungy middle-aged dirty-blonde female meth-head who was standing on a street corner and screaming her head off.  I approached her slowly and cautiously -- like one would approach some feral wild animal, actually thinking that I might be of some help.

"Were you caught in the Paradise wildfire?" I asked her.  Yes, she was.  Everything gone.  "Then why don't you just stay at the shelter?"  Her eyes rolled around in her head.  I took a step back.  This was obviously none of my business.  She grabbed my arm.

"Those bastards threw me out!" she screamed.  And I could definitely understand why.  I handed her a couple of dollars, hoping to buy her off long enough to get out of there -- but she wasn't done yet.  "I used to work in a factory," she rambled, almost starting to calm down.  "Had a really good job too.  Then they moved my [freaking] job overseas."  Ah.  Reaganomics at its finest -- what's mine is mine and what's yours is mine too.

"I had no place to go.  I moved to Paradise."  Where she apparently started making her living by cooking meth back up in the hills.  Hmmm.  Could a meth-lab explosion have started the Paradise fire, I thought -- kinda taking my eyes off the woman for an instant.  Bad idea.  She immediately started revving up into meth-head mode again.  "And just look at you, bitch!" she cried.  "All warm and comfy in your big puffy jacket and boots.  You don't have a clue what it's like to be me!"  Hey, I gots economic troubles too!  But then she spit at me and I moved on.

Actually, I ran back into the library and hid in the women's restroom until some mothers with children started giving me strange looks.

So I borrowed one of the library's computers and googled "Paradise" and "Meth".  Turns out that Paradise wasn't just a sweet little retirement community after all.  It was also the "Meth Capital of California".  That explains a lot.  This woman wasn't the first meth-head I'd seen wandering aimlessly around Chico.  I'd seen lots of them, apparently disgorged by the fire.
https://www.bestplaces.net/comments/viewcomment.aspx?id=A7A5E24D-1B13-4D25-8469-87A8187AFFEB&city=Paradise_CA&p=50655520

So.  What have I learned?  Other than that I tend to be sort of a wimp around out-of-control meth-heads?  I learned that it wasn't the immigrants who stole our jobs here -- and that it isn't Black people who are the top American criminals.  It is the greedy American corporations who have created the economic mess that we are currently trapped in.  Duh.  https://www.youtube.com/watch?v=Zc1i-p7G19A

I also learned that it was the American "privatization" (aka theft) and the American "downsizing" (aka greed) that went on here during the Reagan years that screwed all the rest of us up -- and that these heinous crimes are still going on right here right now.  https://www.sevenstories.com/books/4097-giants

Apparently the Paradise wildfire has burned down the homes of thousands of its residents, but it has also flushed hundreds of meth-heads out of the hills as well -- the non-urban homeless, the invisible rural economic casualties of American greed.  And I was there too.  It was not a pretty picture.  Americans deserve better than to be cast off like old shoes by the global elites.  But, hell, if they can do that to Syria, Palestine, Afghanistan, Yemen, Iraq, Vietnam and Honduras, they can easily do that to us too -- so stop acting so surprised.
https://www.mintpressnews.com/decade-long-u-s-campaign-foment-syria-revolution-unseat-assad/227648/