The American presidency: A short history of auctioning it off to the highest bidder

"And what am I bid for this White House?" the auctioneer cries.  Sometimes I think that Christie's or Sotheby's are running our government -- not the electoral process.
The weapons manufacturer in the front row holds up his paddle.   "I bid four million bucks to put this here Hollywood actor into the White House".  Sold!  And Ronald Reagan suddenly becomes presidential -- if only he can follow the script and declare a phony proxy war on Central America (and Reagan also imported MS 13 in the bargain as well).
Eight years later.  Same thing.  "And the White House goes to that guy in the third row dressed up like James Bond."  Then, boom, just like that George Bush Senior steps into the job (with a little help from his pal Willie Horton).  And suddenly the man who was in Dallas when Kennedy was shot is now calling the shots himself and we get that phony Gulf War as a result -- plus that bloody ten-year proxy war on Iran as well.  Two phony wars for the price of...ten.
Bill Clinton goes on the auction block next -- and we get that phony war on Yugoslavia.  And why not?  His handlers did place the highest bid. 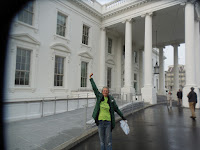 Next comes that joke George W. Bush, "the man you would most likely want to have a beer with".  His handlers bought the White House for him -- and we taxpayers are still paying the price of that bid.  But it was well worth it to his handlers -- eleven trillion bucks profit from a few million dollars' bid.  Those phony wars on Afghanistan and Iraq were worth every cent.
"What am I bid for Obama?" the auctioneer asks next.  Some Deep State guy in the back row slowly raises his hand.  "Sold!"  Cheap price to pay for the trillions in profits from those phony proxy wars on Syria, Libya, Ukraine and Gaza.  https://consortiumnews.com/2016/06/08/democrats-are-now-the-aggressive-war-party/
And in 2016 we learned once again that the highest bidder always gets to purchase the White House -- as Donald Trump is shoved into the Lincoln bedroom.  So what new phony wars will we get the honor of paying for under his watch?  https://www.counterpunch.org/2018/02/05/why-we-should-fear-the-washington-establishment-figures-who-are-pulling-the-strings-in-the-trump-administration/
PS:  Nobody in America seems to be paying attention!  Not only has our democracy been auctioned off to the highest bidder but our way of life has been auctioned off to the war machine as well.  Let's let Trump have his military parade.  Why not?  We've paid for it -- trillions and trillions of dollars.  We might as well see what we've chosen to buy instead of buying stuff that will make us be happier, feel safer, live longer and have healthier kids.  https://www.wrmea.org/018-march-april/immigration-aid-and-the-israelization-of-america.html
Are you aware that Israeli and US warplanes and/or missiles have just bombed Syria AGAIN?  Trying to wave a red flag at Russia, trying to start a nuclear war, a weapons manufacturer's ultimate wet dream -- but not mine!  And all this freaking talk here at home about "Russia Russia Russia" is clearly geared to get us ready for World War Three.  And, fools that we be, we'll deserve it if (when) we get it.  https://www.rt.com/news/418180-us-strike-syria-aggression/


Stop Wall Street and War Street from destroying our world.   And while you're at it, please buy my books.  https://www.amazon.com/Jane-Stillwater/e/B00IW6O1RM
Posted by Jane Stillwater at 11:34 AM