Holiday blues: How I survived Christmas's war on Me

When I was growing up, Christmas was always an ordeal.  My father was postmaster in our town and he always worked 15 hours a day during the pre-Christmas rush.  My mother always seemed to come down with pneumonia.  And my sister always got her physical work-out by beating me up.  I hated Christmas in Millbrae.  Christmas in Millbrae still haunts my dreams.

So this year I decided to take the bull by the horns and actually spend Christmas in the belly of the beast -- exorcising the ghosts of Millbrae Christmas Past once and for all.  So I took a room at the Inn (obviously not the one in Bethlehem) and then drove around.

I drove past my childhood home.  I drove past my old school.  I walked around the main street.  I got more and more depressed.  Back then I was an outcast, my high school's only Beatnik.  And here I am now, years later, still on the outside looking in -- like that old fairy tale about the little match girl.  Poor me!

But then I trudged back to the Inn and checked my e-mail.  SO many sad stories there.  The Walker fire in San Diego.  Saudi Arabia's cruel plan to starve 17 million Yemenis to death.  The arrest of 16-year-old Ahed Tamimi, Palestine's own Joan of Arc (along with an Israeli journalist's article demanding that she be tortured and raped while in prison).  The tyranny in Honduras, the typhoon in the Philippines, the idiocy in Washington DC.  http://mondoweiss.net/2017/12/tamimi-slapped-talking/

And then I started to feel better.  And then I even started to feel lucky and blessed.  l even realized that Christmas wasn't making war so much on me after all -- although American "Christians" seem to be making "war" on everyone, both here and abroad.

And then a Christmas miracle happened.  My daughter Tanya showed up, took me out for the best Chinese food ever and spent the entire meal telling me what a wonderful mother I had been.  Doesn't get much better than that.  And her friend Anthony turned out to be one of the very few people in this whole world (besides me) who still knew how to dance the Four Corners!  https://wonderful.restaurant/ 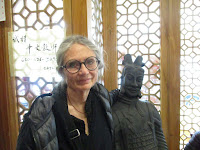 Nobody knows what the New Year will bring -- but I am hoping with all of my heart that it will finally bring peace to the world, and that all our wealth and hopes will no longer be squandered on creating a cruel and worthless American empire that benefits none of us except the shamelessly wealthy and the heartlessly mean.  And also I am hoping for many more trips to that wonderful Chinese restaurant in Millbrae.

PS:  About that so-called war on Christmas that the alt-right is always yelling about?  Bah humbug, just another example about how America's so-called "Christians" have got it so dangerously wrong.  Their idea of a "real" Christmas is when everyone  runs out and buys stuff that they can't afford -- in the name of Jesus.  Huh?  So much for fitting through the eye of a needle.  https://www.indystar.com/story/news/2017/11/27/now-war-christmas-scorecard-naughty-and-nice-retailers/897640001/

PPS:  My eight-year-old HP Pavilion Slimline computer just bit the dust, and now I'm using the public library's Intel Core to check my e-mail.  Santa didn't bring me a new computer for Christmas.  Obviously.  Does that give me a good reason to declare War on Santa?