Thanksgiving is coming up pretty soon, right?  Pilgrims and Indians, turkeys and pumpkin pies.  So now might be a good time to ask ourselves, "Why did the Pilgrims come over here in the first place?"  Let us review. 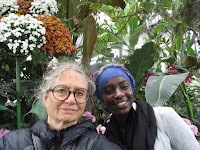 It was cold and wet and rainy on Plymouth Rock back in 1621 and there was no WalMart and no AirBnB.  Pilgrims must have been out of their minds to come here!  So why did they come?  Pilgrims came here because Britain was a hot mess back in the day.

Today, Americans just love to go visit Merry Old England and I myself totally look forward to the annual San Francisco Dickens Christmas Faire every year.  But Britain wasn't like that back when the Pilgrims left it -- way before Prince what's-his-name married Kate Middleton.

No, the Pilgrims left Britain because they were forced to.  It was a matter of life and death.  They were basically refugees.  And a whole bunch of other refugees from all over Europe followed them here later -- and America became a huge melting pot of ideas, cultures and religions.

But now the New World's melting pot has moved to Toronto.  Everywhere I look here, I see people from foreign lands who, like the original Pilgrims, also came to seek refuge from the craziness of their former homelands.  But there is a really big difference between the 1621 Pilgrims and the 2017 Toronto refugees -- and the difference is clear. https://www.telesurtv.net/english/news/Syria-US-and-UK-Illegally-Supplied-Chemical-Weapons-to-Proxies-20170818-0006.html Every single refugee in Toronto (and there are thousands and thousands of them from all over the entire world) is here in Toronto today for one reason and one reason only:  Because their own home country has been systematically attacked, invaded, bombed, infiltrated, irradiated, impoverished, stolen and/or devastated by the USA.  http://www.informationclearinghouse.info/48026.htm

PS:  Back in 1620, American Indians were perfectly happy to live where they lived -- until the Europeans came, that is.  Not such a hot Thanksgiving for them, now was it?  More like a Halloween.

Stop Wall Street and War Street from destroying our world.   And while you're at it, please buy my books.  https://www.amazon.com/Jane-Stillwater/e/B00IW6O1RM
Posted by Jane Stillwater at 8:13 AM