Urban Shield: Doing unto us what we did to Iraq, Syria, etc.

How many Americans even remember America's brutal and unnecessary "war" on Vietnam?  Even though 50,000 (fifty thousand) of our sons and daughters died in that conflict?  And that said "war" went very badly for us when a bunch of determined farmers in black pajamas kicked our butts?

How many Americans even know that our military-industrial complex financed, encouraged and promoted Saddam Hussein's "war" on Iran in the 1980s -- even though that brutal and uncalled-for attack lasted ten long bloody years?  And that Iraq, even though it was working hand-in-hand with both America and Israel and probably most of Europe too, couldn't even manage to defeat puny Iran?

And journalist Steve Fournier also asks the same question about Russia.  "Would you entrust a war to an army that couldn’t defeat some of the weakest nations on earth?  The armed forces of the United States have been engaged for over a generation in warfare against governments in Afghanistan, Iraq, Somalia, Libya, Yemen and Syria.  They have managed to destroy lives and property in abundance and have extinguished entire ancient cultures, but they have accomplished no discernible mission.  Typically facing poorly-armed and undernourished enemies, they have been unable to record a victory since 1945.  Should we trust them to take on Russia?"  http://www.currentinvective.com/wp/?p=223

And then there were all those bloody and unnecessary "wars" on Nicaragua, Guatemala, Yugoslavia, Iraq, Libya, Afghanistan, Palestine (by proxy), Syria, Yemen, Chile, Korea (twice so far) and so on -- all of them now conveniently forgotten.  http://www.moonofalabama.org/2017/06/white-house-says-it-will-fake-chemical-weapon-attacks-in-syria.html#more

Hell, Americans can't even remember any of the centuries of "wars" on poorly-armed American Indians or even the three or four centuries of brutal and cowardly attacks on defenseless Black people, conveniently referred to as either "slavery" or "Jim Crow".

And now the same folks who brought us all those stupid and shameful "wars" abroad are now trying to bring these same stupid and shameful "wars" home here too.  Does your local police department really need a tank?  Seriously?  Urban Shield sounds pretty much like Iraqi Shield or Afghan Shield or Syrian Shield, all of which ended badly for the civilians of those countries.  Bad news for them -- and now almost certainly bad news for us too.  http://www.theamericanconservative.com/articles/how-america-armed-terrorists-in-syria/

But great news for the military-industrial complex!

And speaking of urban stuff, here's the next chapter of my recent adventures in New York City:

Day Three, Part 1:  One would think that I would have fallen asleep easily last night after taking the red-eye from SFO -- but no.   Maybe I got a few hours of primo sleep.   But whether or not sleep was involved, my wake-up call still came at 6:15 am.  http://jpstillwater.blogspot.com/2017/06/are-americans-even-good-people-any-more.html

And then I discovered Hudson Street Park.  20 blocks of lovely waterfront walkways going directly from The Jane hotel to the Javits Center.  Birds actually sang!

Then I got in free to the Book Expo's authors' breakfast on my press pass.  Karmic reward!  Sweet.  But shoulda known that the breakfast was not going to be gluten-free.  Not even oatmeal or fruit cups were involved.  Just orange juice and cream cheese for me.
Damn, there's a lot of people here -- and at $70 a pop.  Who's going to speak?  Stephen King.  Anyway, here I am, sitting right next to the Random House/Penguin VIP table.  There must be at least a thousand people here.  150 tables of ten, plus a bunch of seating for groundlings in the back.

Oliver King, Stephen's son, spoke first.  "Our family sat around and pitched one-line story lines to each other at the dinner table.  One of those story lines was about a world without women.  Our new book 'Sleeping Beauty' resulted." 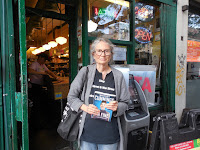 Stephen King said, "I used to be a latchkey kid back before there were even latchkey kids -- back in the 1950s.  And my mom used to say, 'If there's no ring around the toilet bowl, you know that a woman is around'.  Men just don't do things like that.  Women are the cooling factor in society when men run too hot."  Surely Stephen King didn't just say that, that all women are good for is cleaning the toilet.  I'm sure he meant something else.  Will have to read the book to find out.

Whitney Cummings spoke next.  "I wanted to write something that will last forever.  Books are permanent.  I'm an unapologetic book nerd.  They don't bombard you with visual chaos like social media does."  She's funny as hell, is a screenwriter for "Two Broke Girls".

"It's totally hard to write a book.  I thought it would be fun and sexy like when Cary Bradshaw did it on TV.  But it was actually pretty frustrating.  And then there's fact-checkers.  They should go over to Fox News.  Fox News needs fact-checkers.  Leave me alone!"

She used to be crazy.  "You can't just magically stop being crazy.  I went into therapy.  I was co-dependent, couldn't say no.  Busy but unfulfilled.  Needing the approval of others."  She gave a really humorous presentation.  Made all this terrible stuff sound laugh-out-loud funny.  "Ambian and wine is not a sustainable combination."

Her book is a manual about how to change your brain.  "People only show their good sides on social media but a lot of people really are in pain.  But people do want to change and grow.  This book will hopefully provide healing laughs."

Claire Messud spoke next.  "My novel, The Burning Girl, is about two young girls and their close friendship as they pass through the storm of adolescence.  We all remember middle school.  When something doesn't make sense just think, 'Picture this as happening in middle school,' and then it will make perfect sense.  A week can contain a year's worth of emotions."

We all put together stories to make sense of our lives, Messud told us.  "We fill in the blanks.  Many elements are familiar, universal -- what we give up to become adults, from only pieces of what actually goes on.  But a state of uncertainty between knowing and unknowing is what makes us human."

Scott Kelly spoke next.  520 days in space, 340 of them consecutively.  He wrote a book called "Endurance".  When he was a kid, he read a book called "The Right Stuff" and immediately decided to become an astronaut.  "It surprised even me that I did this, and my book is the story of how I got there.  Today is a critical day in our nation's future.  I have looked at the earth from space.  You don't see a lot of rain forests down there anymore.  You can actually see the pollution.  Plus all the cooperation between people and countries regarding space programs shows that we can do anything if we have dreams."

Then Jessmyn Ward spoke about her new book, "Sing, Unburied, Sing".  "Faulkner once said, 'To understand the world you must first understand Mississippi'.  My mother was a domestic and my father was a factory worker.  I never thought I would become a writer.  Mississippi will hug you before it smothers you."  Mississippi also has some of the best bookstores there is.  Jackson, Tupelo, Oxford.  "The past bears down especially hard on the present in Mississippi.  Why?  It was heavily invested in slavery and then later in Jim Crow and Parchman Farm.  How does the past live in the present?  That's the question I constantly ask myself.  Writing is my attempt to answer this question."

She tells us that, "Mississippi is the foundation and walls.  America is the roof.  Your home fails you, murders you.  There is terror -- and there is hope."

Pete Souza then spoke about his new book, "Obama".  He was the White House photographer during Obama's presidency.  "So.  I miss this guy.  I took two million photos in eight years."  A nice selection of his photos were projected onto a big screen, and that was the end of the authors' breakfast.

Then it was off to the main exhibit hall to see who was giving away free pens.  Nobody was!  I only scored three or four pens.  Bummer.

But at the Soho Press booth I scored the new Colin Cotterill book!  And a pre-publication copy at that!  Not to mention a new Timothy Hallinan book, "The Widows of Malabar Hill" and a few others as well.

I also got a copy of the new Joe Ide book, "Righteous," and some free macadamia nuts -- but paid three whole dollars for a tiny bag of potato chips.  Had to.  By that time I was starving.

Bought a deli salad after leaving Javits Center and then took the 9th Avenue bus back home to The Jane.  Am going back tonight to attend the Hillary Clinton School of Lies but that will be about it for the BEA for today.  I think.