I recently saw HRC speak to a sold-out audience of over 1,000 at the BEA Book Expo at the Javits Center in NYC -- and she looked downright jiggy.  Jiggy?  "What the freak does it mean to look jiggy?" you might ask.

There are several definitions of the word.  "Well-dressed.  Sexy.  Nervous."   First, let's eliminate "sexy".  Even I gotta admit that Clinton was looking good but she's a US Senator for Chrissakes.  "Sexy" is out.  So that just leaves "well-dressed" and "nervous".  But she was actually sort of well-dressed -- and thankfully not in a pants-suit.  Jiggy outfit?  Check.  https://www.youtube.com/watch?v=3JcmQONgXJM

But was Clinton nervous?  That depends.  She actually came across as being casual, comfortable, well-spoken, in control and actually even nice -- not bad for someone who was personally responsible for murdering approximately a million people in Libya and Syria -- people who would be alive today if it wasn't for her. 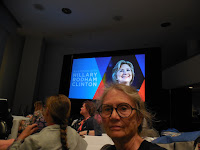 But was HRC nervous about being personally responsible for giving us Donald J. Trump?  Not so that you'd notice.  So was Hillary nervous about anything at all?  Yeah.  She as jiggy about Russia.  "I find it outrageous that a foreign country could actually interfere with American elections!"  And she actually said that with a straight face!  She must have been hecka nervous to say something like that.

Here's the truth.  Israeli neocolonialists have been interfering with American elections for the past 25 years -- and no one in America except me has ever given a flying freak about that.  No one in Washington has ever been elected during this time without explicit permission from AIPAC, the neo-colonialists' right arm.  And Clinton is right in their pocket.  No wonder she's jiggy about Russia.  Russia didn't do it.  Hillary did.

Or perhaps Clinton is jiggy about Saudi Arabia and all the big bucks she received from them.  But HRC didn't mention the House of Saud either.  Only Russia.  That seems hecka jiggy there too.