What!  You say that you've already been to New York City dozens of times and yet you've never eaten rice pudding at B&H Dairy on Second Avenue?  Well.  That is a fatal lapse in your education.  Fix it immediately or else.

Back in 1965 when I was a poverty-stricken idealist living in an apartment on the Lower East Side that rented for $28 a month and when LSD was still legal, I used to save up my pennies and treat myself to a bowl of B&H's fabulous rice pudding every few months.  So when I went back to NYC for the Book Expo recently, I met up with an old friend at B&H and we talked.

"There is new construction going on in Manhattan everywhere you look these days," she said.  "Everyone wants to invest in real estate in New York City."

"And in Berkeley too," I replied.  "There are currently 10,000 new high-rise apartment units going up in my home town as well."  http://www.berkeleydailyplanet.com/issue/2017-06-09/article/45790?headline=Speak-up-on-Tuesday-for-affordable-housing-in-Berkeley--Becky-O-Malley

"Actually, it's happening all over the world," said my friend.  "Even in the Middle East, construction is going on like crazy."   Humph.  That's just so not fair.  Look at me and look at you.  Can any of us average Americans afford to run out and build high-rise condos worth billions of bucks?  Hardly.  It's all we can do to keep from being homeless.

So where are all these billions -- trillions -- of construction dollars coming from?  "War profits, drug money, oil barons and sheiks.  Hedge funds.  Shadow banks."  Shadow banks?  Now there's a scary thought.  Aren't our regular banks shadowy enough as it is?

PS:  From my vantage point up on the High Line Park the other day, I counted 24 different new high-rises going up.  And from the top floor of the Whitney Museum I counted five more. 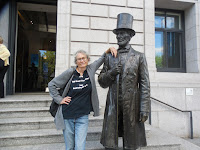 Ah, the Whitney.  Its Biannual Exhibit was amazing.  And one whole section was devoted to works by artists who were deeply in debt.  That's scary too.  No condo-high-rise ownership for them.  Seems like you either gotta murder babies in the Middle East, pollute the world with oil emissions and/or sell drugs to school children in order to play at being Bob the Builder in New York.  Being creative in America will only smash you headlong into debt.

PPS:  Here's a quote from Larry Fink that I stole off the artists' wall at the Whitney:  "The two greatest stores of wealth internationally today are contemporary art and apartments in Manhattan."  Fink is the head of Black Rock.  Black Rock is the world's largest shadow bank, is worth 5.1 trillion dollars and is almost personally responsible for the 2008 financial crisis with its mortgage-backed security scam.  But, hey, at least Fink is supporting the arts.

PPPS:  The media is always talking about RussiaGate. But what about SaudiGate, IsraeliGate and GlobalCorporationGate -- the guys who launder money by buying property in Washington DC, primarily on Capital Hill and Pennsylvania Avenue.
___________________