Are Americans even good people any more?

Today's proverb from my Franklin Planner says, "A people that values its privileges above its principles soon loses both."  Dwight D. Eisenhower said that.

America is spozed to be a Christian nation and yet its military has murdered hundreds of thousands of women and children randomly in almost half the countries of the world -- and done it for fun but mostly for profit.  American "wars" on Vietnam, Iraq, Syria, Libya, the former Yugoslavia, Ukraine, Afghanistan, Yemen, Palestine, Honduras, Panama, the Philippines, Cuba (the list goes on and on) have been criminally-shameful and illegal rapes and slaughters of much weaker countries, based solely on American cruelty and greed.  What would Jesus do?  Certainly not this!
http://www.worldcat.org/title/terlena-breaking-of-a-nation/oclc/76706500

And here at home, we Americans fight hard for our right to have guns so that we can protect ourselves against robbers and The Government, but only end up mostly killing our children by accident and committing hate crimes on purpose.  How Christian is that?

Americans are spozed to love liberty yet we have Urban Shield and the NSA and the Patriot Act at home and the CIA and "Special Forces" assassination teams abroad, ones  that support the worse kind of dictators such as the Saudi un-Muslim mafia, the Ukraine un-Christian neo-Nazis, the Israeli un-Jewish apartheid neo-colonalists and those brutal butchers in ISIS and al Qaeda.
http://21stcenturywire.com/2017/06/07/the-machiavellian-plot-to-provoke-saudi-arabia-and-qatar-into-a-blood-border-war/

America is spozed to be the Robin Hood of the free world and yet we constantly take from the Poor and give to the Rich.  Counting the jobless, the homeless, those without healthcare, soldiers sacrificed to defend corporate profits, victims of yucky drinking water, victims of infrastructure failure, your aging parents, your friends and mine, etc., it looks like many more than a million Americans will die far before their time in this coming year because of the Koch brothers, the Deep State, Citizens United, the Wall Street casino where the House always wins, media "war" propaganda lies in order to sell WMDs, and the souls of the corrupt legislators that have been have been bought and paid for by these ill-gotten gains.  To say nothing of shameful Jim-Crow-style election fraud by the GOP and also gross interference in our elections by, wait for it, Israel and Saudi Arabia -- of which both Republicans and Democrats are blatant receivers of whole boxcars full of untraceable cash.

"Among a people generally corrupt, liberty does not exist," my Planner goes on to tell me.  Edmund Burke said that.  And he was right too.  https://www.amazon.com/Gods-Money-Street-American-Century/dp/1615778055

Are Americans only getting the corrupt and cruel leaders that they deserve?  It certainly does look that way.  And are Americans even good people any more -- to have let all this evil corruption go on for so long?  I don't even want to think about the answer to that question.  Let's think about something more pleasant instead.  Here's a report on my first two days in NYC:


"Everything's like a dream in New York City" -- especially its book-publishing industry, its celebrity personalities, its amazing museums, its outstanding people-watching opportunities and its vibrant street life.

Day One:  I leave for New York in six short hours and guess what?  Just finished going through my usual heavy-duty pre-travel panic attacks -- including the usual "I could just stay home and lose my airfare money and I would be okay with that" phase, followed closely by the "OMG, I'm so hungry and there is nothing to eat!" phase, and then followed by the "I'm gonna hide under the bed in denial" phase.  And yet here I am aboard a BART train that goes to the San Francisco airport and I'm actually okay with that -- and even excited.

And now I'm on the JetBlue red-eye flight with no problems.  The service is great but the free inflight movies all seem to be at least five years old.  Mrs. Doubtfire?  Really?  Moneyball?  I played a game-watching extra in that one at least five years ago.  The Sound of Music?  Huh?  Finally settled on 27 Dresses which was entertaining and cute.

Day Two:  Well, apparently I must have slept on the plane because there are clearly two hours unaccounted for on that flight.  But can't remember falling asleep.  But so what.  I got to JFK airport, took the subway (the E train) to 8th Avenue and 14th Street, dragged my suitcase for seven blocks and voila.  Here I am at The Jane hotel -- in the world's smallest hotel room.  Even the one I had at the Tokyo airport was bigger.  We shall see.

They don't call these rooms "cabins" for nothing.  Built in 1907, The Jane used to be a seaman's hotel for when sailors were ashore.  But, hey, the rate is really cheap, the staff is really nice and they don't have bedbugs.  That's what counts.  Plus I'm right near the shared bathroom.  Good to know in the middle of the night.  Plus the bathroom is really clean.  And the cabins are wood-lined and cute. 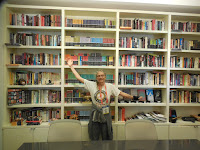 Today was a day for walking my legs off.  30 blocks up to the Javits Center, and another 30 or 40 blocks wandering around what used to be Hell's Kitchen and now appears to be Yuppies' Kitchen instead.  And the highlight of the day?  Stopping by Soho Crime publishing house on lower Broadway and meeting one of its editors again.  Seeing all those excellent books.  Wow and double-wow!  Plus Soho is located right around the corner from a Whole Foods market.  Two birds with one stone.  Mental stimulation and dinner.

"Got any recommendations for a good Chinese restaurant?" I asked the editor -- the question that Henry Chang's main character in his latest Soho murder-mystery, "Lucky," hates to be asked. https://sohopress.com/authors/henry-chang/

"Sure," answered the editor.  "Anything on Doyer Street is great.  Nam Wah, Tasty Hint, all of it's good."  Maybe I'll go there on Friday because tomorrow is going to be jammed -- starting with getting up at 6:15 am in order to go see Stephen King and Owen King talk about their new book "Sleeping Beauties".  Apparently its a story about the consequences of having a world without women.  Then I'm meeting a friend at 3:00 pm for rice pudding at B&H Dairy on Second Avenue, and then going to a talk by Killary Clinton at 6:00 pm.  So much fun.

Bottom line:  Walking around the streets of New York is a whole tourist treat all in itself and boy did I do that today!

Posted by Jane Stillwater at 1:05 PM