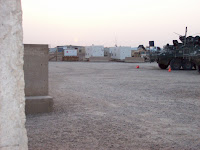 Running for President in Iraq: Which candidate will win the grunts' vote?

While sitting in a bus on a runway on a US airbase in Kuwait and waiting for my C-130 to take off for Baghdad at 3 am this morning, I got bored and decided to take a straw poll of the grunts I was gonna fly with and see who they wanted to vote for in the 2008 primaries.

"I don't know who is running," said one soldier.

"I don't plan to vote," said soldier number two. Three more soldiers didn't know who was running either and a few more also didn't plan to vote. Nobody mentioned Giuliani, Hillary or Obama. Actually, nobody mentioned anybody -- much to my surprise. These troops' lives depend on who is in the White House. You would think that this would be a prominent event in their lives, seeing that whoever controls Congress and the White House will pretty much determine their fate.

"I don't know much about politics," said another soldier. "I don't vote."

"That's okay," I jokingly answered. "I'll vote for you! I'll move to Ohio and vote twice." The grunt laughed. "And who is your favorite candidate?" he asked. You could tell that he too was bored. We had been stuck on the runway a freaking long time.

"My two personal favorites are Democratic candidate Dennis Kucinich and Republican candidate Ron Paul," I replied. "You wouldn't have heard of either of them. They are honest politicians and don't have big bucks. Has the last 100 years taught us nothing? Nobody with the good of America at heart is ever gonna get elected. Politics don't work that way."

As my friend Stewart is fond of saying, "Ben Franklin gave us a Republic but he had his doubts as to how long we would be able to hold on to it."

Then, finally, at 6:30 am, our plane took off and guess what? They had run out of space in the hold of the airplane and I was FORCED to ride up front in the cockpit. I am here to tell you that those guys are surrounded by all kinds of dials, wires, levers, switches and knobs. Plus I got to see everything as we went into the famous approach to the Baghdad airport, diving suddenly straight down while taking evasive action at the same time. Air sickness sudenly became a real possibility.

Once on the ground, I wandered around looking dazed and confused from lack of sleep and dragging a whole bunch of luggage behind me (it finally showed up) until someone finally took mercy on me and stuffed me into a bus to the nearest military transit camp and the nearest dining facility. The DFac! Yea! For lunch we had barbequed chicken, chef's salad, mashed potatoes and -- gasp! No pumpkin pie! So I sacrificed for God and Country and suffered along with plain old sweet potato pie. Ah the hardships of War.

Anyway, as I was lined up at the dessert table someone spotted my Orlando Pirates hat and started talking to me about soccer. Up the Bucs! And I asked him my standard presidential candidate question, "Who will you vote for?" and boy did he have opinions. At last. A grunt who cared about politics. And was a Pirates fan too. Good man. "I like Chuck Hagel," he said, "but he's no longer running."

Then another grunt noticed my hat. "I'm in favor of John McCain," he said. "You know why? McCain actually came over here." To him, that was an important point. "Also, I hear that only 49% of the ballots that servicemen cast over here actually get counted. So why should I go to all that effort if it's not even going to count?" Why indeed? I'll tell you why! Because, dag-nab it, Ben Franklin gave us a republic and I wanna keep it that way!

But the soldiers I talked with today aren't the only ones who are skeptical about politics. I am too. "Do you want to know who will be taking over the White House in 2008? " I asked a friend. "It will be the guy who is the richest and/or most willing to sell America out for money and power." Figure out who that is and you can predict the winner. It's as simple as that.