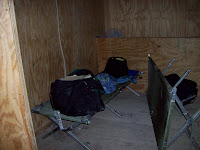 Heartbreak Hotel: Let's open up a resort and spa in Al Anbar, Iraq!

Here's a sad story from Riverbend's latest blog. She's now in Syria, a refugee from battle-weary Baghdad. But how long can she afford to stay there? The Syrian government is apparently about to close down its border -- plus Iraqi refugees already in Damascus are running out of money fast.

Here's a portion of Riverbend's blog: "It is estimated that there are at least 1.5 million Iraqis in Syria today. I believe it. Walking down the streets of Damascus, you can hear the Iraqi accent everywhere. There are areas like Geramana and Qudsiya that are packed full of Iraqi refugees. Syrians are few and far between in these areas. Even the public schools in the areas are full of Iraqi children. A cousin of mine is now attending a school in Qudsiya and his class is composed of 26 Iraqi children, and five Syrian children. It’s beyond belief sometimes. Most of the families have nothing to live on beyond their savings which are quickly being depleted with rent and the costs of living."

What to do? How about opening a Club Med in Anbar? The city of Hit (pronounced Heet) is now pretty peaceful and would make an excellent alternative to driving all the freaking way to Syria. Plus when I walked down the street in Hit the other day, I met a carpenter who complained that there wasn't much work for him right now so I bet we could put him to work building hotels. And I was informed by the Mayor's office that Hit specializes in manufacturing building materials. Unemployed carpenters? Building materials just laying around? Let's build and open a resort and spa in the city of Hit for the poor endangered citizens of Baghdad!

Why go all the way to Syria when you can find peace and quiet right here in Anbar? Add a few amenities and voila! The fabulous Hit Hilton! The Regency Hit? Or the just plain Hit Comfort Inn. Brilliant idea, if I do say so myself.

"But why not! You gots the land, you gots the material. You gots the customers. And it's out in the desert like Vegas. A match made in Heaven. What's not to like?"

"For one thing, you gotta consider the tribal configuration. Baghdad is run by one set of tribes. Hit is run by another." Turf war? "Exactly. Plus the residents of Hit would be all worried that the highly-educated Baghdad people would snap up their jobs."

Humph. But I still think the idea is a good one. Why go all the way to Syria when you can stay in idyllic bucolic beautiful Anbar. Anyone out there want to invest?
PS: Here's a photo of my cot at Taqqadum
Posted by Jane Stillwater