My day-trip to Baltimore: "Out of Order"

My goal for today was to go visit the Freddie Gray memorial mural in Baltimore, Maryland.  Took the Greyhound from Washington DC, day-tripping, arrived on time.  So far so good.  https://www.rollingstone.com/culture/features/death-of-freddie-gray-5-things-you-didnt-know-w476107 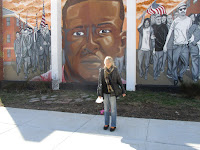 Except that nobody here in Baltimore seemed to know where the Freddie Gray mural was.  So I went to the main library.  Librarians know everything.  "North Mount Street at Presbury."  Got it.  "Take the Metro to Upton."  Check.  Except that the subway was closed for renovations.  So I went next door to the legendary Lexington Market, founded in 1782.  Bought a crab cake.  Hey, it's Baltimore.  Gotta eat crab cakes.  It's the law.

And then I met "Edward" and things went uphill from there.  He stuffed me onto a yellow-line bus.  We got off at Pennsylvania Avenue.  I followed him around like a lost little duckling for the next half-mile.  We turned a corner.  There was the mural.  It was lovely.  I took a photo of it.  I forgot to bring flowers.

Edward walked me back through Freddie's old neighborhood, one of the most rundown in all of America.  "What was Freddie like?" I asked Edward.

"He was pretty much like everyone else around here, just trying to get by as best that he could in a place with no jobs, run-down schools and shabby housing," replied Edward.  I looked around.  Edward was right.  "People here are always trying to get your spot."  And apparently the po-po had been trying to get Freddie's spot too.

I just got done reading Matt Taibbi's excellent book, "I can't Breathe".  Taibbi talks about "community policing," a policy wherein anything that looks "out of order" on the streets must be gotten rid of.   And the cops, not the laws, get to decide what "out of order" looks like.  This is a national policy, not just in Baltimore.  Our whole country has a policing policy similar to what goes on in occupied Palestine -- or like what happened to Native Americans back when "the  only good Indian was a dead Indian".

And apparently Freddie Gray was "out of order" too.

Please, America,  please think of some way that young Black men can have a safe place to go when society considers you "out of order," a safe place that doesn't involve jail time -- or a coffin.

After Black people have endured over 600 long hard years of slavery, humiliation and having every deck stacked against them, isn't it high time for White people to stop trying to make Black people feel "out of order" just for being alive.

PS:  Thank you, Edward, for being my tour guide to north Baltimore.  You really did put the charm in "Charm City" and I'm grateful.