"One person, one vote," an idea that is pretty much toast

At the Berkeley-Albany Bar Association luncheon recently, we had a choice between three different desserts -- cheese cake, chocolate mousse or both.  I voted for both.  We also had a presenter who spoke on the subject of voting access and gerrymandering in America.  The speaker made some very interesting points.

"The democratic concept of 'One person, one vote' has actually never been applied to American voters on the federal level.  Ever.  Perhaps it applies when we vote for members of the House of Representatives, but as for our vote for who will represent us in the Senate?  Not so much -- because voters in rural states such as Wyoming have far more voting power than voters in urban states such as California."  Or words to that effect.

So from the very beginning, our founding fathers made it impossible for "One person, one vote" to actually ever happen.  A New York voter, both then and now, only has 78% of the voting power of an Alabama voter due to Senate restrictions.  Interesting for sure.

"And Republicans are better at gerrymandering than Democrats.  In the 2012 elections, Dems got 51% of the vote but only got 39% of the representation."  Then he talked about something called "the efficiency gap" -- which involved higher math so he sort of lost me.  "In Wisconsin, the voter efficiency gap was 10 to 13 percent, guaranteeing Republican wins even in a Democratic state.  Our system today is profoundly under-representative."

However, we can't just blame it on the Repubs.  "If the Dems were the ones doing the gerrymandering, the Republicans' love of it would go the way of their hatred of the deficit."  Out the window in a New York minute.

"And what about Citizens United?" I asked myself.  "That ruling gives a small handful of rich people a hecka lot more votes than the rest of us poor schmucks."  Citizens United should be illegal for that reason alone.  And apparently the US Senate should be illegal too -- from the perspective of keeping America a democratic country.  But if you want America to be an oligarchy, then it's hardly worth rocking the boat about any of this stuff.

But even though the speaker didn't have time to discuss the effects of voter identification laws, the New Jim Crow laws or electronic vote-hacking, his message was still crystal clear.  The idea of one person and one vote in America?  That ship has pretty much sailed. 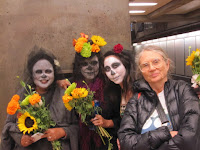 So what can we do to save the American ship of state from being run aground by vote-pirates?  Make sure we are the ones who count the votes?  Use only paper ballots?  Don't let dead people vote?  Make voting a legal requirement if you want to get a driver's license or whatever?  Reconfigure the US Senate to represent all of us?  Go after the oligarchs with torches and pitch forks?

Damn it.  I am an American.  I vote.  And I want my vote to count.  I want a choice of three desserts in my ballot box -- not just one slice of dry toast.