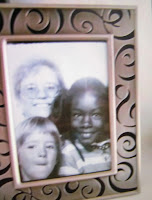 It had been a rather cold winter that year plus I had definitely burned the candle at both ends -- working late every night at the local folk-music coffee house, getting up early to take my daughter Ruby off to pre-school five days a week, spending weekdays over in San Francisco's Castro District as a docent at the Upper Market Street Gallery, hanging out with the Floating Lotus Magic Opera crew at the Woolsey Street House, playing on the Caffè Mediterraneum soccer team and spending time at the Albatross, the Midnight Sun, Brennan's and dancing to Commander Cody at Mandrake's whenever my parents could babysit.  Plus I had a Tibetan Buddhist boyfriend named Peter and also demonstrated against the corrupt Republican government in Washington during my spare time.

And it was always cold during the winter of 1973.  And I was always exhausted.  So I dragged myself and little Ruby down to Puerto Vallarta for two glorious weeks in the sun on the beach at Yelapa.

We got as far as San Diego before the flu struck.

Good grief, do I remember having that flu.  And I vowed never to get the flu ever again.  And I haven't.  And it wasn't because of having no damn flu shots either.

"Your mind wants to keep going going going like a robot," someone told me back then, "but your body needs rest.  So your mind and your body have a big struggle over this and your mind always loses -- because your body simply goes out on strike.  And that's exactly what a flu is.  It's your body going on strike until it finally gets to rack up more hours in bed than your mind thinks that it needs.  That's why, ultimately, there is no real prevention technique for the common cold.  Or for the flu either."

"But what about germs!" I replied.

"Flu germs are constantly with us, 24/7.  Constantly.  They are everywhere.  But they can only actually get to us when our body's defenses are down."

So from that day to this, I have always made sure that my body has no real reason to go on strike.  And I never got the flu again.

PS:  It also helps a lot that I also wash my hands.  Back in the day, when terrible diseases were rampant, the average American worker avoided baths, lived in unimaginable squalor, had no proper sewage or indoor toilets, survived on bread and potatoes alone and worked 15 hours a day, seven days a week.  No wonder diseases were rampant.  https://www.goodreads.com/book/show/7507825-at-home

Thus it sort of pisses me off that Big Pharma is taking all the credit for stopping all their big long lists of hundreds of diseases -- when soap and water (and those brave labor unions that gave us the weekend) are often the real stars of the show.