In less than a week I'll be flying down to Atlanta, to spend a few days on Peachtree Street and attend a Netroots Nation convention there.  http://www.netrootsnation.org/  Looks like I'm actually gonna be marching through Georgia too -- but not as a carpetbagger.  "And so they sang the chorus from Atlanta to the sea...."  https://www.youtube.com/watch?v=XpGJdQWlEH4 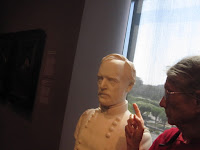 It seems to me that if anyone in the world would be qualified to recognize a carpetbagger when they see one, you would think it would be someone from the American South.  But no.  Ever since Nixon developed his "Southern Strategy," almost everyone south of the Mason-Dixon Line has been supporting Deep State carpetbaggers whenever they possibly can -- and probably even hoping to become one of them too.  It's like Southerners were all suffering from the Stockholm Syndrome where victims begin to identify with their tormentors.

Or perhaps I am getting this all wrong?

Well, I'm about to find out.

Otherwise this is my side of the story and I'm sticking to it.  Seems to me that the Deep State is joyfully singing the very same chorus from Atlanta to the sea that General Sherman did -- as it and its local minions happily steal from the Southern salt of the earth in order to give to the Rockefellers, the Rothschilds, Citbank, Monsanto, Raytheon, Halliburton and Lockheed.

According to journalist Robert Parry, however, there actually is a way that Trump can actually stop being just another sleazy Deep State carpetbagger and start becoming an actual good prez -- believe it or not.  "But how could such a thing possibly happen?" you might ask.  By him actually telling us the freaking truth about stuff that goes on in the Beltway!  Then Trump could actually become the freaking hero of the day and actually represent us little guys in DC like he said that he would -- sort of like "Mr. Trump goes to Washington" instead of the current "Mr. Trump is terrified of the Deep State and is constantly licking their boots".   Is Trump already suffering from Stockholm Syndrome too?  Looks like it.  https://consortiumnews.com/2017/07/30/can-trump-find-the-great-path/

"But do I think any of this will happen?" asks Parry (and the rest of us too!)  "Not really.  Far more likely, the Trump presidency will remain mired in its 'reality-TV' squabbles with the sort of coarse language that would normally be bleeped out of network TV; the Democrats will continue substituting the Russia-gate blame-game for any serious soul-searching; the Republicans will press on with more tax cuts for the rich; and the Great American Experiment with Democracy will continue to flounder into chaos."  https://consortiumnews.com/2017/07/30/can-trump-find-the-great-path/

PS:  Talk about biting the hand that feeds you!  Every single year, southern Red States simply hold out their hands and holler "Poor me!" until the compassionate, liberal and progressive Blue States in the north and the west pour billions of $$$ into said outstretched hands.  And then these very same Red States turn around and show their undying gratitude by bad-mouthing and disrespecting the very liberals and progressives who feed them, clothe them, put food on their tables, give them jobs and educate their children.
https://www.youtube.com/watch?v=zPrOEMW60MY

That's just wrong.  And impolite too.

If the Blue States ever wised up enough to let the Red States slide, the American South would become a Third World country faster than Winchester rifles disappear at a Walmart two-for-one sale.

PPS:  Various Deep State carpetbaggers over the years have also convinced a majority of voters in the mostly-Christian Red States that it is in their very best interests to spend our country's patrimony on playing Herod in the Middle East by murdering multitudes of beautiful babies from Afghanistan to Yemen; on sending the South's precious sons and daughters into harm's way so that filthy-rich carpetbagging corporations can act like Pharisees; and on helping oil billionaires slink through the eye of a needle.  http://www.globalresearch.ca/going-after-isis-killing-civilians-as-military-doctrine/5602175

How the freak does all this murdering and maiming of The Innocents by the Deep State stack up to what Jesus has taught us?  It doesn't.  Must be the Stockholm Syndrome at work here too.