Just when I had begun to think that the American Deep South had finally lost its moral compass completely, was contributing nothing to our culture except racists and neo-Nazis, was making a mockery of sacred Christian values and had stuck us with such modern-day carpetbaggers and moral mosquitoes as Nixon, Reagan, the Bushes, Clinton and Trump -- then something monumental happened to change my mind.  I took a trip to Atlanta, Georgia.

I'd gone there to attend the Netroots Nation's annual convention, but also to have a little free time to look around and be a tourist. 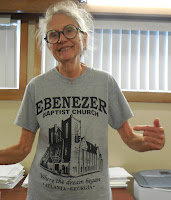 First I visited the Ebenezer Baptist Church where Martin Luther King Jr. first took his courageous and world-shaking moral stand.  "Make America moral again!" he told us.  And we did.  We stopped segregation.  We stopped the slaughter in Vietnam.  We stopped economic injustice.  And we also tried to make the world a better place.

Next I visited the Jimmy Carter Presidential Library, thanks to the Metropolitan Atlanta Rapid Transit Authority's most excellent #16 bus.  Carter is another American moral giant with a strong vision for a better world.  And guess what?  He too is a product of the American Deep South.  http://readersupportednews.org/opinion2/277-75/45213-we-must-assure-north-korea-the-us-will-forego-any-military-action-as-long-as-they-remain-peaceful

And then there is Al Gore, a truly moral man who has almost single-handedly taken on the gigantic task of saving the entire human race from extinction -- and not only from industrial pollution but from moral pollution as well.  I just heard Gore speak in Atlanta at the Netroots Nation convention.  "We must stop industries from using our skies as sewers," he said.  And what was the result of him giving us this extremely crucial warning?  After he began telling us this inconvenient truth, America's modern-day carpetbaggers stripped him of his presidency and forced some moral cretin upon us instead.

So now whenever I get down in the dumps about how the Deep South just keeps grinding out its multitudes of neo-carpetbaggers and moral lepers, I'm also going to remember that the Deep South also gave us such moral giants as Carter, Gore and MLK.  And then I'm going to pray that the Deep South can finally continue to give us even more of these shining examples of moral courage as well -- instead of just producing disgusting sewers of bigotry and hate.

Now is the time for all Americans to also become moral giants too -- all of us.  Now more than ever.  Before morality disappears entirely from the country that we hold so dear.  http://hosted.ap.org/dynamic/stories/U/US_TRUMP_VS_PUTIN?SITE=AP&SECTION=HOME&TEMPLATE=DEFAULT&CTIME=2017-08-16-14-30-29

But right now, morality no longer appears to be self-evident in America -- and "The Charlottesville Horror" also seems to be playing in all too many theaters down South.  http://www.tcm.com/mediaroom/video/1019353/Amityville-Horror-The-Original-Trailer-.html

PS:  Oh crap.  Looks like "The Charlottesville Horror" is also coming to my home town Berkeley again -- on August 27.  Those neo-Nazi creeps really do need to get a life.  Their mothers need to send them back to Bible school at the very least.  Jesus taught tolerance, justice and love, not bigotry, violence and hatred.  http://www.dailycal.org/2017/08/15/berkeley-mayor-wants-to-stop-planned-alt-right-rally/