Hawaii: My own private "Pivot to Asia"

"There are only 8000 actual native Hawaiians left here right now," said a friend of mine who I was visiting in Honolulu.  So.  What has happened to the rest of them -- besides the usual death by disease and colonialism that is.  "They can't afford to live here any more.  They have been forced to move to the mainland." Ah.  Economic genocide strikes again. 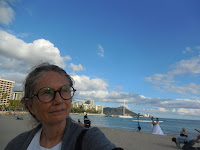 But Hawaii has also pivoted to Asia in another big way -- its Asian tourists.  Staying in a Waikiki hotel is really expensive -- and yet even the most expensive hotels here are positively flooded with thousands of Japanese and South Korean tourists right now, many of them being sweet young married couples with really cute babies.  But how the freak can they afford to vacation here in such large numbers?  I  thought that China was the one siphoning off most of America's money.  Apparently not.

My friend also told me, "Developers are building a whole bunch of condos over near the Ala Moana shopping center right now, ones that sell for two or three million dollars a pop.  And the Japanese are buying them up as fast as they can be built."  Oh.  That makes sense -- so that when the entire island of Japan becomes radioactive because of Fukushima, people over there will have another island to come to.  That's thinking ahead.  For now.

Anyway, I came over here to speak at a book convention -- and my talk went very well if I do say so myself.  Who knew that I would excel at public speaking?  Certainly not me.  But public speaking is a lot like writing.  No interaction with individual people is involved.  That works for me because I'm just not at ease with being one-on-one with individual people.  Plus at the conference's banquet, I finally got to sit at the popular kids' table.

I love Hawaii, would love to live here.  The weather is nice, the beaches are amazing -- plus you don't have to go all the way to Tokyo or Seoul (or time-travel to Vietnam under Nixon) to get that happy feeling of being in Asia.  You don't have to pivot very far any more.

I can't even imagine what it must feel like to be a native Hawaiian living here right now, working a menial job, seeing all of this breath-taking beauty that is Hawaii and knowing that all this paradise used to be theirs -- but is not any more.  Perhaps they might feel like Palestinians do, thrown off their land by European colonialists who strongly believe in the motto, "Do unto the Palestinians what the Nazis did unto us."

Oh, if only President Trump had passed his travel ban just a little bit earlier -- then Captain Cook and James Dole wouldn't have been allowed to land here, kept out "for national security reasons".  And the Nina, the Pinta and the Santa Maria would have been turned back too -- not to mention that the Pilgrims would have been prohibited access to Plymouth Rock.

And then there would have been no brutal Indian massacres, no ghastly slave trade, no Civil War that butchered hundreds of thousands and perhaps even no World War I or World War II.  And the Muslim Holocaust in the Middle East wouldn't have happened either because America would still be in the hands of the Cherokee and the Sioux who don't really care about being greedy and blood-thirsty colonialists.  And millions wouldn't have died in Africa either because there would be no American corporate pirates over there to steal Africa's land, diamonds and gold.

Europeans would have been forced to stay in Europe where they belonged and not brought their terrorism here.

Stop Wall Street and War Street from destroying our world.   And while you're at it, please buy my books!  http://straitwellbooks.blogspot.com/2016/04/our-top-best-seller-right-now-is-bring.html
Posted by Jane Stillwater at 12:00 PM