A writer's life: Spying on one's own mind

On March 16, I'm going to give a short talk at a writers' convention in, wait for it, Hawaii!  Yay!  Never been there before.  Am quite looking forward to it.  http://www.leftcoastcrime.org/2017/ 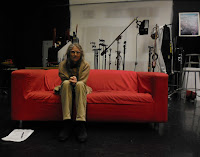 In order to warm up for this big event, I'd like to talk here about what happens to me when I write.  It's a subliminal process.  I try to keep my conscious brain very quiet so that I can spy on the secret workings of my subconscious mind, back there where all the good stuff is lurking in the shadows, swamps, recesses and mountain-tops of my own mental reservoir.

There are several ways to spy on one's brain.  Meditation, long walks, dreams.  It doesn't take waterboarding or the NSA to figure this stuff out.  Just try to shut up and listen.

Another way to find out what's going on backstage in my mind is to actually physically write down words on paper.  Who the freak knows what will actually come out of my brain if I do that?  Certainly not me.

What do I think about that prediction?  "If Americans actually do come to their senses in just ten short years, I will be very surprised.  There is no indication at all so far in the last fifty years that Americans are anything but gullible dupes for any kind of propaganda that is shoved in their faces."

Or I might write, "I predict that, in the future, Americans will finally realize that they've been suckered into 'wars' on Syria, Libya, Palestine, Yemen, Ukraine, etc. just like they were suckered into the 'wars' on Vietnam and Iraq."

My thoughts about that?  The Nazi Holocaust only murdered six million Jews.  The American/British/French/Israeli/Saudi neo-colonial Holocaust has already slaughtered seven million Muslims.  But then who's counting dead Muslims?  Certainly not any of us American suckers.  https://forums.t-nation.com/t/the-muslim-holocaust/162262

Or how about this one?  "I predict that Americans are really going to miss unions after they're gone."  No, that's just wistful thinking.  Americans will be too busy working three jobs and scrambling to keep out of the poorhouse to think philosophical thoughts like that.  https://soundcloud.com/user-887995524-149532189/democrats-fight-trump-the-man-but-not-his-austerity-and-militarism

PS:  The last time I did a whole bunch of spying on my own mind, I ended up writing a book.  "Visions of a Lost and Future World".  So if I can do it, then so can you.  https://www.amazon.com/Visions-Lost-Future-World-Stillwater/dp/1532803850/ref=cm_cr_arp_d_product_top?ie=UTF8

PPS:  My life is going along really well right now.  I'm speaking at a book conference, just had the principal role in a student film at the California College of the Arts, have a car that is still running, my Social Security pension keeps me going and am in good health thanks to Medicare.  And the greedy idiots in the beltway are, as usual, busy trying to screw up my good life in any way that they can.

We haven't had anyone who knew what they were doing in Washington since the CIA had John Kennedy assassinated -- with the possible exception of Jimmy Carter.  Bush, Reagan, Eisenhower, both Clintons, Obama, Bush 2, Congress and even the freaking Supreme Court have done every single thing that they possibly can to destroy our economy and get us into World War 3.  And now Trump is also trying to screw up my world by bombing babies in Syria and Yemen and giving Wall Street a free lunch.  http://www.ronpaullibertyreport.com/archives/us-drone-strikes-have-gone-up-432-since-trump-took-office

And what the freak was a Navy SEAL doing in Yemen anyway?  Besides helping those mean Saudi bullies steal poor defenseless Yemen's oil?

Doesn't anybody inside the Beltway know how to do anything right?  Doesn't any one of those jackasses know that America is all about me -- and those salt-of-the-earth types like me -- and not about them.  Apparently not.

Posted by Jane Stillwater at 10:15 AM