I have been totally surprised by the sheer awesomeness of Mexico City -- from a tourist's point of view.  It's got monuments and museums and antiquities that will knock your socks off.  Friendly people.  Great transportation.  And everything is cheap, cheap, cheap, cheap.  How can they do that?  Easy.  Mexico didn't just spend 11 trillion dollars on weapons of mass destruction like America has.

Sure, this country has drug-war problems up in the north, in Sinaloa and Juarez.  But that doesn't seem to affect Mexico City.  And if America would just eliminate its so-called "War on Drugs" and make marijuana completely legal and cocaine and heroin as legal as Oxycontin, the Mexican drug wars would be over in a heartbeat.  Believe it.

Here's me, basically a little old lady, walking the streets of downtown Mexico City after dark and being perfectly safe.  And the people are awesomely helpful and friendly.  Can we say any of that about most American cities?  What do you think?

"But, Jane," you might ask, "exactly what are your favorite things to see?"  Crap, don't even get me started.  There's so much stuff!  The main cathedral is almost garish in its elaborate gold-leaf attempts to show off Spanish colonial power and wealth.  And in the plaza outside, some Aztec shaman guy did a ritual on me that was guaranteed to give me "power and respect".  Will let you know how that one turns out.

The Museum of the Revolution is awesome!  That's how they do it down here -- bandoleers and trains and Villa and Zapata.  Father Hidalgo and Benito Juarez.  America's sleazy Deep State would have had to watch its back.

Then there's Frieda Kahlu.  Her museum is truly inspiring.  She lived with so much physical pain that it drove her to become a great artist.  And even while almost on her deathbed, she still managed to attend a rally in protest of America having just brutally and illegally seized democratic Honduras (not for the first time either -- or for the last). 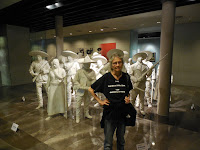 And all that beauty and glory of Chapultepec Palace?  The Mexican branch of my familia took me there.  Those rulers lived high on the hog, as my mother used to say.  But where are they now?  Having spent all their money on wars of aggression and weapons of mass destruction, they had nothing left for upkeep of the palace.  The retro-colonial equivalent of 11 trillion dollars, all poured down the rat hole of conquest, greed and craziness.  Sound familiar?  Mexico's deja vu equivalent of America's current money-pit debacles in Afghanistan, Iraq, Honduras, Syria, Libya, Palestine, Africa, Haiti, Ukraine, Ferguson, Standing Rock, Berkeley (see footnote), the South China Sea, Sinaloa, etc.  But I digress. https://www.newcoldwar.org/whats-really-happening-syria-consumer-fraud-lawyers-mini-primer/

The bottom line is that it's sunny and warm and wonderful down here in Mexico City, the people are friendly, the tourist attractions are some of the best in the world and the food is really good -- and cheap too.  What's not to like?  So buy your plane ticket right now and get your booty on down here.  Yes, I am talking to you.

Footnote:  According to activist Mike Lee, Berkeley's "Poor Tour" tent city, one that protests homelessness in America by trying to make it more visible, recently got raided by the City police.  At the cost to the City of approximately $30,000 per raid and after at least five of these brutal raids that I know of, that's $150,000 spent by the City to harass these protesters.  That wasted money could have purchased at least ten "tiny homes" for Berkeley's homeless.

Berkeley has approximately 1,000 homeless residents right now.  America has approximately two million -- and the number is growing. You may be next.  http://www.dailycal.org/2016/10/31/old-bum-mayor-guy-mike-lee-focuses-berkeley-housing-issues/