You don't need to live in a five-bedroom big-box suburban McMansion in order to stay warm and dry in the winter.  Just ask Bilbo Baggins.

Recently I attended a vigil in memory of a homeless woman who had frozen to death on the mean streets of Berkeley, CA.  You wouldn't expect something like that to happen here in Berkeley -- but it did.  Homeless people brought candles to the steps of City Hall in order to honor this poor woman's memory.  Someone also donated a portable space-heater to help keep the more fragile vigil-keepers warm.  But in an ironic twist of fate, cops arrived and confiscated a space-heater at a vigil for a homeless person who had just frozen to death.  But I digress.

With our federal government now threatening to shut down HUD subsidized housing in order to have more money to give to banksters, big oil and "war" profiteers, this sudden shift in the distribution of our tax dollars, away from the rest of us and into the pockets of the disgustingly-wealthy, could mean that approximately ten million Americans would be kicked off of HUD subsidy programs.

"Households that receive assistance comprise 9.8 million people, or roughly 3 percent of the U.S. population," sez HUD.  Imagine what it would be like if housing subsidies all suddenly disappeared?  Hey, it could happen -- and probably will. 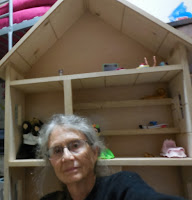 If three out of every one hundred Americans suddenly found themselves on the mean streets of our country, the whole face of America the Beautiful would change overnight.  https://www.cbo.gov/sites/default/files/114th-congress-2015-2016/reports/50782-lowincomehousing-onecolumn.pdf  Suddenly there would be this swamp of homeless people around us.  Cincinnati would look more like the favelas of Rio de Janeiro.  Seattle would look like some barrio in Mexico City.  Atlanta would look like a scene out of "The Walking Dead".  And parts of Berkeley would look like a Hooverville shanty town left over from the 1930s Great Depression.  Hell, all of America would look like that.

HUD subsidized housing serves as a disguise, a stage set, a prop -- so that the world won't know how poor so many Americans actually are.  It's a small price to pay.  But I digress again.  http://jpstillwater.blogspot.com/2007/01/hud-section-8-housing-revenge-of.html

What I really want to talk about is how Americans can solve this very-real housing crisis which has descended upon us like a giant black cloud, whether we have HUD subsidies or not.  And I would then suggest that we solve this housing crisis by taking advice from the Hobbits.  "Go small or go home!"  Just sayin'.

Mike Lee, a member of the Berkeley Homeless Commission, suggests that we build lots of "tiny houses" -- for a price as low as $16,000 each.  http://www.forbes.com/pictures/emeg45jjkm/5-boulder-by-rocky-mountain-tiny-houses/#6c6bb4de19b9  My friend Jennifer suggests that we bring back the good old-fashioned trailer court.  And I suggest that we get Frodo Baggins on the job.  Problem solved.