After having returned back home to Berkeley last week, I assumed that I was finally finished with writing about Mexico City -- but apparently not. 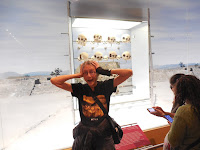 One of the top images from there that still keeps popping into my brain, one that I apparently brought back home in my luggage, is a flashback to Mexico City's glorious main cathedral -- and that image still haunts me.  From floor to ceiling, it seemed like the whole place was garishly covered with gold.  Gold.  Gold everywhere you looked.  So now I feel compelled to write about that.

All that wealth in just one single church.  Enough gold to keep me and all of my friends in riches for the rest of our lives.

But the wealth in just this one cathedral represents only a minuscule fraction of the fabulous tons and tons of gold that Spain extracted from Latin America a few centuries ago -- so much gold.  Scrooge McDuck woulda gone nuts.

But what actually happened to all that gold?  Did it make Spain rich?  Sure, for a while.  Spain used to be the richest nation on earth.  But then wars were declared and squabbling began and this and that happened -- and then suddenly all that wealth was gone, just gone.  https://www.amazon.com/Visions-Lost-Future-World-Stillwater/dp/1532803850/ref=cm_cr_arp_d_product_top?ie=UTF8

Which reminds me of the vast wealth of another nation -- ours.  America also used to be the richest nation on earth.  Not any more.  First Franklin Roosevelt died and the Dulles brothers and Richard Nixon schemed their evil schemes to steal what they could from the New Deal.  https://www.amazon.com/Devils-Chessboard-Dulles-Americas-Government/dp/0062276174

And what ever happened to all that gold in Fort Knox -- let alone all that gold in the Social Security slush fund.  And then 9-11 happened, the most evil scheme of them all -- and eleven trillion dollars in "war" blood-money suddenly began disappearing down this or that rat hole too.  https://consortiumnews.com/2017/01/16/donald-trump-v-the-spooks/

And now America, like Spain, is no longer the richest nation in the world.  What the freak happened?  This and that.  http://www.mintpressnews.com/genocide-in-yemen-media-complicit-in-us-saudi-war-crimes/224106/

Mexico City still has its grand gold-encrusted cathedral to remind us tourists of what the power and glory of the old Spanish empire used to look like.  But we Americans don't even have something like that left to remind us -- except perhaps for the glaring monument of our gigantic national debt.