Let's make one thing perfectly clear:  America is definitely not like the fairy-tale miller's daughter who spun straw into gold for Rumpelstiltskin.  However, it appears that our so-called leaders must think that they actually are like her -- considering the way that America continues to pay for an endless "war" that costs trillions of dollars.  But where, exactly, does all that money actually come from in real life?  "It comes from the taxpayers of course," you might say.  No, now you're thinking of another fairy tale -- the goose that laid the golden egg.  http://theduran.com/the-continuing-story-of-the-white-helmets-hoax/
Theoretically, our real world should function far differently from the one that the Brothers Grimm dreamed up.  But according to journalist Peter Koenig, it does not.  America's "endless wars" really are being financed by fairy-tale creatures who actually do spin straw into gold.
"Let’s face it," states Koenig, "the six Anglo-American media giants that dominate the western world can spend billions on propaganda.  Money doesn’t matter.   Money is made of thin air.  Money for wars doesn’t matter either – it’s also made of thin air.  It’s made by the dollar manufacturing machine, meaning the US private banking system.  Today, 97% of all the money produced in the US is made by private banks in the form of debt, mostly by Wall Street."  http://www.globalresearch.ca/war-propaganda-syrias-destruction-by-the-lies-of-the-western-media-washington-will-never-let-go-their-target-is-world-hegemony/5549508
Apparently private banks can arbitrarily declare that there are trillions of dollars that can be borrowed and lent with impunity -- imaginary Lean Green that they magically create and destroy.  Sounds like a fairy tale to me.  http://dissidentvoice.org/2016/10/money-is-debt/
But maybe Rumpelstiltskin was right after all, that America actually can go on paying for endless "wars" endlessly -- that is, until the Pied Piper comes and takes our children away. 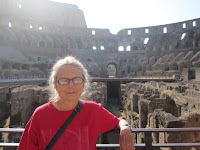 PS:  Speaking of money, I'm also pretty much disgusted with national politics right now -- wherein rich guys buy our government for pennies on the dollar and corruption is rampant for this reason.  In fact, the world's greatest superpower is currently acting more and more like the corruption of ancient Rome.  I'm even expecting Nero to run for president against Caligula next -- and with those two candidates being the only choices Americans will be given to vote for.  http://www.counterpunch.org/2016/10/20/rigged/

PPS:  According to journalist Bob Fitrakis, "Libyan leader Muammar Qaddafi’s government [used to hold] 143 tons of gold, and a similar amount in silver.  During late March, 2011, these stocks were...taken from the vaults of the Libyan Central Bank in Tripoli....  Qaddafi was deposed [by Secretary of State Clinton] for his gold."  So -- who knows?  Maybe Hillary actually is the miller's daughter after all.  http://www.counterpunch.org/2016/10/05/the-dreadful-chronology-of-gaddafis-murder/

Apparently Qaddafi's son may actually be returning to save Libya from the Queen of Chaos -- but only after he was forced to play Sleeping Beauty for five years by the Bad Fairy herself.  Not even the Grimm brothers could have seen that one coming.  http://www.crescent-online.net/2016/10/libya-comes-full-circle-in-five-years-zafar-bangash-5495-articles.html

Stop Wall Street and War Street from destroying our world.   And while you're at it, please buy my books!  http://straitwellbooks.blogspot.com/2016/04/our-top-best-seller-right-now-is-bring.html
Posted by Jane Stillwater at 9:38 PM