First we Americans got stuck with McCarthyism, wherein out-of-line voters had their lives completely destroyed if they even thought about speaking up.  American voters were shamelessly intimidated.  The RepubliDems were large and in charge.

Then came Chicago back in 1968 -- when rioting police basically beat all out-of-line voters to a pulp. 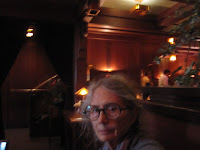 However, the RepubliDem old-school political machine did learn to become a bit more subtle after that -- but not by much.  Ronald Reagan, their next fair-haired boy, was called the "Teflon" president because no matter what kind of crap he pulled, he always got away with it.  Why?  Because Wall Street and War Street and the mainstream media always had his back.  And their propaganda machine, instead of the cops, now beat out-of-line voters to a pulp.  And that seemed to work even better.

Reagan would do stuff that looked and smelled like dog dookie, but a fawning press would rush to assure us voters that the crap we were being forced to swallow was actually candy and cake.  And even to this day, Americans are convinced that Reagan is a god -- not the devil incarnate that he actually was.

And most Americans wanted Gore or even Nader for president in 2000.  But we got Bush-Cheney shoved down our throats instead.  Of course there were a few whimpers here and there back then (I myself whimpered a lot) but the Republican high command told us that this new line of bull-crap was all for our own good.  And the Democratic high command bobbled their heads in agreement.

Then along came Obama, ready to play ball.  "No more war," he told us, fingers crossed behind his back.  And we believed him too -- because, in America, words speak louder than deeds.  http://mycatbirdseat.com/2016/06/94852-democrats-are-now-the-aggressive-war-party/

But what about the 2016 election?  American voters are finally starting to wise up.  "All that glitters is not gold," they are finally noticing at last.  The next generation of American voters is no longer drinking the Kool-Aid.  And so the Republican National Committee and the Democratic National Committee are now being forced to join hands and start playing "Whack-a-Mole" -- attempting to suppress voter revolts as they spring up, again and again, first in one place and then in another.

Trump wins the nomination on an anti-war platform that includes making peace with Russia and letting Syria work its own problems out?  "How can we take it away from him?" screams the RNC.  "What war-mongering party hack can we put in his place?"

Sanders, that peace-loving man of the people, is about to win the nomination?  "How can we stop him from that?" squawks the DNC.  No problem.  Just ask the voters in Arizona, California and New York how the DNC did it.  They just cheated, lied, committed election fraud and cut Bernie entirely out of media access.  Voila!

And now Whack-a-Mole has been activated yet again and Clinton is being shoved down our throats too.  But here is the real  question -- just exactly how much longer can the RNC and the DNC keep playing Whack-a-Mole before American voters really really revolt?

PS:  Here's a comment from my son, posted on social media the night that the MSM, Wall Street and War Street whacked us California voter-moles over the head in order to give Clinton her big win:

"If Hillary is going to get even a fraction towards what this world needs in a leader, she's going to have to pull out some sh*t that she really hasn't shown yet, because all I've seen so far is glad-handing, false face, pandering (oh damn girl, what's that in your bag, is that f*cking HOT SAUCE? OMG, sold!), selling out, unyielding war-mongering, reinforcing a RACIST SYSTEM and BUILDING ON IT.  She has shown me nothing that makes me feel like politics are mine.  Or my generation's.  Or my children's generation.  It's f*cking bad-ass that she's a woman.  But she is the wrong woman."

PPS:  Dr. Jill Stein, the Green Party candidate for president,  just schooled us Americans with this obvious home-truth:  "The two major parties want to offer voters a choice of the two most disliked politicians in America.  Lesser evil gets worse every election."  https://twitter.com/DrJillStein/status/740936884004761601?s=02

If we want a woman in the White House, then why not one who will actually be a good role model for our daughters -- such as Dr. Stein or Elizabeth Warren? Instead of one who gloats about killing Libya and keeps illegal e-mails in her basement so she can avoid getting caught?  And we all know that Bill will run the White House anyway.

I'd rather have Sanders -- or even Trump -- in the White House than that.

PPPS:  Electing RepubliDems again and again is the very definition of insanity:  Doing the same thing over and over, always getting the same crappy results -- and yet still expecting good results.