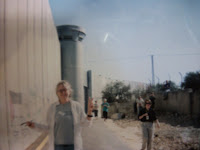 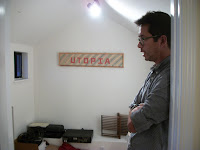 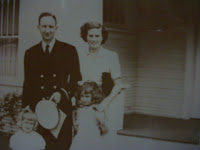 Holy crap, I am now 70 years old -- and do you know what that means?  "That you're over the hill?"  Well, maybe that too.  But it also means I'm probably going to be one of the last living members of the "Greatest Generation".

My parents, after surviving the Great Depression by living on walnuts and working three jobs apiece to get themselves through UCLA, were finally able to relax financially by 1941.  They'd purchased a home.  My pop had a job with the Los Angeles post office helping to set up Social Security accounts.  My older sister was out of diapers.  "It's all good," said my mother.  "So let's have another kid."  And thus I was happily conceived -- two months before Pearl Harbor.  Oops.

And that's the true story about how I became a WWII child.

But a few years from now, I'm most likely going to become one of the last people alive on earth today who was also alive during World War II.  And thus all of those words and phrases that every single American used to say every day will soon be totally forgotten.  "Loose lips sink ships" and "Yes we can!" and "victory garden" and "scrap metal drive" and...  Gone the same way as sayings and phrases used in the Civil War, the Napoleonic War, the Crusades.

Well, not to worry.  Many of those World War II words and phrases are not only being still preserved today but are actually becoming living breathing facts-on-the-ground -- in America and Israel of all places.  Even as we speak, American and Israeli neo-cons are adding word after word from WW II to their modern-day dictionary.

Some of the favorite words among America's 1% and Israel's ruling 16 families right now come straight out of any half-way decent WWII lexicon.  Coming alive right here, right now are words like "Blitzkrieg" and "Homeland" and "Stormtroopers".  Perhaps the words themselves have been changed in some cases -- but both Israeli and American neo-cons are definitely hanging on to their meaning!

Of course "Blitzkrieg" has been retired in favor of the more hip "Shock and Awe" and "Cast Lead," but the idea is exactly the same.

"Master Race" and "Aryans" have also become disappeared WWII words but, again, not to worry.  They've still around -- just  morphed into phrases like "The Chosen People" and actions like the new Jim Crow voting laws in Florida.

"National Socialism" may also be an out-of-date phrase now-- but it's been easily replaced with words like "Neo-Con" and "Corporate Welfare" and "Endless War".

"Non-consensual medical experiments"?  In the 1950s, the U.S. fed unsuspecting citizens LSD just to see how they would react -- and they reacted badly.  That happened to a friend of mine, a young woman.  It screwed up her life for many years.

And American and Israeli neo-cons performed that famous "ringworm" radiation experiment on approximately 100,000 Sephardi Jewish school children, killing many of them and giving many others horrible cancers http://www.youtube.com/watch?v=vMp1tef4lg4.

And don't forget all the ongoing Israeli organ trafficking scandals either.  "To fill this need [for organs] former Prime Minister Ehud Olmert, then health minister of Israel, organized a big donor campaign in the summer of 1992.  ...While the campaign was running, young Palestinian men started to disappear from villages in the West Bank and Gaza.  After five days Israeli soldiers would bring them back dead, with their bodies ripped open." http://www.counterpunch.org/2009/08/28/israeli-organ-harvesting/

Dr. Mengele would have been so proud.

And American and Israeli neo-cons no longer use that WW II term "Propaganda" any more.  Why not?  Because "Public Relations" sounds so much better.  But no matter what you call it, a lie is still a lie.

World War II terms like "Sleeper Agents" and "Mole" are also popular words in America and Israel these days.  Think Paul Wolfowitz, duel-citizenship, AIPAC, the CIA-Mossad connection and that truly weird "stand down" order from the Pentagon while Israeli fighter jets repeatedly bombed and strafed the USS Liberty http://www.usslibertyveterans.org/lvablog/#sthash.I2BA71mB.dpbs.

"Stalag"?  http://www.youtube.com/watch?v=hExHLM2raJA Got that word covered too.  Now we've got "Guantanamo" and "Gaza".

Then there's the phrase "Gestapho," which clearly fits the description of Israel's Shin Beth, apparently responsible for the assassination of Yitzhak Rabin -- among other things http://www.roitov.com/articles/rabin.htm.  And in America, we used to have Conintelpro.  But now we've got "Homeland Security".

And since the creation of Cast Lead II against Gaza, even more World War II words and/or ideas have been preserved by Netanyahu and his Wolf Pack, including "Concentrations Camps" and "Lebensraum" and "Final Solution" http://www.palestinemonitor.org/?p=8579.

PS:  In Palestine right now, another word is being used more and more frequently:  "Nonviolence".  And nonviolent protests have become especially effective in the West Bank as Israeli neo-con forces become more and more sadistic and repulsive as "Greater Israel" reaches out for more and more "Lebensraum".  http://bostonglobe.com/opinion/2012/11/23/roy/sctFniw6Wn2n9nTdxZ91RJ/story.html

But how can Palestine's new and weak nonviolent forces possibly stand up to Netanyahu's American-armed-and dangerous multi-billion-dollar Shock and Awe?  There is a way.   It's called "hacking."  Or to use another WWII word, "Decoding".  A modern army such as the IDF runs not on manpower or F16s or white phosphorus or nuclear reactors or torture and other forms of breaking Geneva conventions.  A modern army runs on computers.  Hack them and the Big Guns are screwed.

This is also a lesson that the American and Israeli "Resistance" might need to learn too.  If you truly want to defeat the neo-cons' "Thousand-Year Reich," don't hoard ammunition, learn to fire assault weapons and survive in the woods.  That's too old skool.  Get a degree in computer science instead.  Then keep the GOP from hacking out voting machines.  Join Wikileaks.  Join Anonymous!  http://www.huffingtonpost.com/2012/11/17/anonymous-hacks-israel-all-your-base_n_2150881.html

PPS:  Doesn't anybody in Israel or America ever notice that "Occupation" never works?  Apparently not.  It didn't work for the Vichy government in France or for the Japanese in Nanking or Bataan -- or for the Americans in Vietnam, Iraq and Afghanistan for that matter.  And "Occupation" is not working out in Palestine either.  60 years of bloody occupation later, "The Resistance" there is still going strong.

Punishment always leads to resistance.  This seems to be a basic rule of human nature.  And with all these harsh Thousand-Year-Reich occupations, something always seems to go wrong!  Kindness toward our fellow human beings always works better.  Plus here's an added extra benefit:  Kind people don't rot in Hell when they die.  Or in Gehenna.

PPPS:  For years now, American neo-cons have used the "Good War" idea to justify all kinds of Lebensraum brutality all over the world.  And as for the Israeli neo-cons?  They have become "Holocaust" ghouls -- preying on the memory of the horrible suffering of European Jews during World War II in order to justify the infliction of this very same suffering onto the poor trapped "Warsaw Ghetto" Palestinians.

Advertizements for myself: In these hard times of brutal (and illegal) corporatist ball-busting socialism-for-the-rich-only, I am doing whatever I can to make a spare dollar. Here are some of my current alternate-economy schemes that never seem to work -- but I keep hoping!
******
What next?  I'm still trying to get to Haiti ASAP but unfortunately my investigative-reporting trip has had to be postponed until June.  Please donate toward my trip's expenses here if you can:
https://www.wepay.com/donations/going-to-a-vodou-cave-in-haiti

Need an actor to play an older woman in your movie? Then I'm your man! I can portray all kinds of older women -- from judges, business execs and other insane zombies to bag ladies, cancer patients, kindly grandmothers and dying patients in rest homes. I've played them all. So send me a script and let's do this. Hollywood, here we come!
****
Are you a plaintiffs' attorney who is tired of writing those pesky personal injury settlement briefs all the time? No problem! I can write them for you. Years of experience. And pay me only if you win the case.
****

I also wrote a book about going on Hajj (also included as a chapter in "Bring Your Own Flak Jacket," but this book is cheaper -- but it's worth buying them both!) My book on the Hajj is so outstanding that I bet even Christian fundamentalists will love it! Please buy it here: http://www.amazon.com/Mecca-Hajj-Lessons-Islamic-School/dp/0978615700/ref=cm_rdp_product
****
"Imagine a world where EVERY child is wanted, nurtured, protected and loved: World peace in one generation!" You can now buy T-shirts, coffee mugs, tote bags, truckers' caps, baby gear and/or teddy bears with this logo printed on them. They make great gifts, especially for parents and teachers. To purchase, just click here: http://www.cafepress.com/StillTWaters