(Here's a photo of me, marching in Montgomery while seven months pregnant with baby Lorraine. Love the glasses, made the dress myself.) 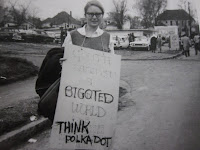 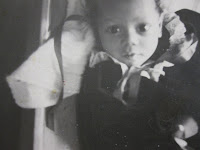 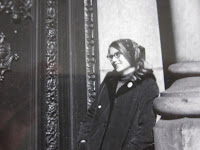 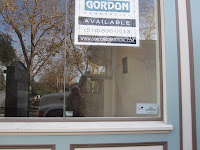 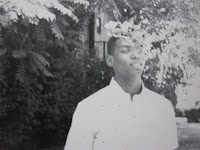 "Wallace, you never can jail us all": But Wells Fargo can

I am still totally pissed off at Wells Fargo after they callously and mercilessly ruined a friend of mine's credit by charging her outrageous fees for an "overdraft protection" service that she never signed up for http://jpstillwater.blogspot.com/2011/03/wells-fargos-illegal-overdraft.html. And now I'm all pissed off at Wells Fargo for about 16 trillion other reasons as well -- none of them cool.

According to Rep. Alan Grayson's revealing synopsis of the GAO's recent Federal Reserve audit, "The main, if not the sole, qualification for getting help from the Fed was to have lost huge amounts of money. The [16-trillion-dollar] Fed bailouts rewarded failure, and penalized success." http://www.huffingtonpost.com/rep-alan-grayson/the-fed-bailouts-money-fo_b_1129988.html

Hey, if my friend's credit is so bad, then why didn't the Feds bail her out too -- like they did Wells Fargo?

But Wells Fargo isn't the only target for my wrath. I'm also pissed off at General Electric and will never ever ever buy another appliance or light bulb or drone from them ever again. And you shouldn't either. Those guys are evil zombie war profiteers, sucking America's very life-blood away -- at our own expense. http://www.youtube.com/watch?v=MNkX6LJSaWE&feature=relmfu

In fact, I am totally pissed off at just about everyone who is stealing from America's treasury -- K Street lobbyists, Supreme Court justices, war-profiteers, Wall Street insiders, the Federal Reserve, White House staffers, congressional puppets of the corporatocracy, off-shore out-sourcers, mountain-top removers, ALL of those corporate-welfare-receiving pirates who are happily busy raping and pillaging America.

And now all these evil corporatist bad guys are threatening to throw us in jail? To throw anyone who objects to being robbed by America's new robber barons in jail? That's what I'm hearing from internet chatter -- that corporatists are now building concentration camps especially designed to hold all us average salt-of-the-earth Main Street schmucks who are finally getting pissed off.

Back in the 1960s, when thousands of us marched on Montgomery with Dr. Martin Luther King Jr., we all sang a song that went something like this: "Oh, Wallace, you never can jail us all!" Well, those days are gone and now Congress and Obama and Cheney and General Electric and Wells Fargo are also threatening to jail us all -- but, unlike Wallace, they CAN. http://www.bagnewsnotes.com/2011/12/occupy-forcing-militarized-pds-to-show-their-colors/.

According to the ACLU, "The Senate voted last Thursday [December 1, 20011] to pass S. 1867, the National Defense Authorization Act (NDAA), which would authorize the president to send the military literally anywhere in the world to imprison civilians without charge or trial. Prison based on suspicion alone. The power is so sweeping that the president would be able to direct the military to use its powers within the United States itself, and even lock up American citizens without charge or trial. No corner of the world, not even your own home, would be off-limits to the military." http://www.aclu.org/blog/tag/NDAA

And why shouldn't corporatists want to jail us all? Just think of all that access to free labor they'll get!

Corporatists in Germany back in the 1940s profited a lot from prison-camp labor. So why shouldn't corporatists today also give it a whirl? Why indeed.

See ya in the hoosegow, folks.

And I'm calling "dibs" on the first bottom bunk to the left of the tent flap.