Have you ever been to our nation's capital?  Unlike the sorry mess we call Congress, the Presidency and the Supreme Court, the actual city of Washington DC itself is actually really awesomely impressive.  Who knew.

Unlike our sell-out federal legislative, executive and judicial branches, the District of Columbia itself has not sold out to Wall Street and War Street for the usual 30 pieces of silver.  Yet.

Much to my surprise and delight, I discovered that the whole entire city is just one big wonderful open-air museum.  The Federal Triangle, the National Mall, Embassy Row?  Far more impressive than the Louvre or even King Tut's tomb.

First I went on the White House tour.  "Will I get to see Ivanka?" I asked.  Probably not.  "Will I be able to give the Prez a very stern talking-to after that shameful disaster he just created in Syria?"  Nah, he's in Florida playing golf.  But the White House itself was fabulous -- looked even better than it did on the set of Scandal.  But I didn't get to see Kerry Washington either.  Rats.  http://jpstillwater.blogspot.com/2017/04/trump-murders-babies-in-syria-wow.html 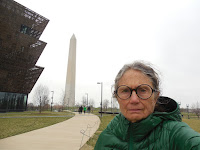 Next I went over to the new African-American museum.  I laughed with Moms Mabley, I cried with Malcolm X.  Put this one on your bucket list for sure.  And because most of the museum's visitors were Black themselves, it gave us white guys a true feeling of what it is like to be in a minority -- only without having slave owners and cops always trying to beat us up or segregationists constantly trying to steal our vote.

Next came the United States Holocaust museum.  There was a holocaust in the United States?  Indeed there was -- somewhere between 13 million and 44 million Native Americans have been victims of genocide.  So far.  And someday I plan to open a Muslim Holocaust museum too.  Already America has been directly or indirectly responsible for the brutal murder of seven million Muslims -- from Palestine, Syria, Iraq, Afghanistan, Iran, Libya, Somalia, Yemen, Yugoslavia, etc. all the way across the world to Indonesia and East Timur.  Wherever there is oil, Muslims have been slaughtered.  http://www.truth-out.org/news/item/40147-the-us-provided-cover-for-the-saudi-starvation-strategy-in-yemen

Finally, I took the Metro up to the Phillips Collection and saw original French painters like Monet, Pissarro and Toulouse-Lautrec.  Priceless.

I wish that I had more time to see all the other DC museums such as the Smithsonian, the natural history museum and the Library of Congress, but I didn't.  But there is always a next time, right?  Or is there?

If you are an American, I highly recommend that you immediately get your booty on over to Washington DC -- before the K Street boys buy up the whole place and sell it to weapons contractors for target practice, to Monsanto so it can pour Roundup on the cherry blossoms, to developers who will tear down the monuments and replace them with condos, or to Big Pharma so it can drug all us tourists with Oxycontin and Abilify so that we won't even notice all the changes.

In fact, what almost nobody in America seems to grasp is that President Assad has lasted SIX WHOLE YEARS as president of Syria -- while fighting the biggest bullies, baby-killers, despots and torturers on the planet (America, Britain, Saudi Arabia, Israel, etc.).  HOW has he lasted this long (and, no, it's not just because of Russia who only just recently entered the fight)?  Because he has the people of Syria behind him, watching his back.   Duh.  http://ahtribune.com/us/trump-at-war/1599-end-of-the-empire.html