There were thousands of happy people at Disneyland last weekend -- and not even one of them was thinking about who did or did not win the presidential election this year.

Not only that, but no one there was even thinking, "Hey, gee, the guy sitting next to me on the pirate ride is Black," or "Why didn't they build a Wall between Fantasyland and Tomorrowland to keep out Donald Duck," or even "Throw all those freeloading grandparents off Social Security and send them back to the Haunted Mansion where they belong".

Everyone at Disneyland was just trying to have fun.

No one I ran into at Disneyland was thinking about bombing the Middle East or whether or not Russia should be hit with nuclear weapons ASAP or even why para-military goon squads are tear-gassing Native Americans at Standing Rock simply for defending their own land.  https://www.youtube.com/watch?v=nRO7arI1KNo

Families at Disneyland were just having fun.  Hell, even I was having fun.  Perhaps America could learn something from us.

Perhaps we should be asking the president of Syria if he wanted to have us build Splash Mountain in Aleppo instead of having America waste billions of dollars on weaponizing "moderate rebel" al Qaeda thugs with enough deadly ordinance to blow up Frontierland and then some.  https://off-guardian.org/2016/11/28/media-silent-as-lame-duck-congress-passes-resolution-for-syrian-no-fly-zone-provoking-war-with-russia/

Perhaps we should give Wall Street its very own "Small World" instead of a trillion-dollar bailout at our expense.

Perhaps we could even make America great again by sending everyone inside the DC Beltway off on a "Jungle Cruise".  Or firing our mainstream media into orbit on a "Star Tour".  Or telling the Deep State to go take a running jump off the "Matterhorn".

Because when given an actual choice, individual average American working-class families like the ones I saw at Disneyland just want to have fun -- not be the world's latest Darth Vader. 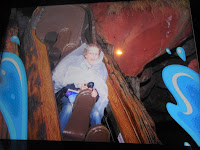 There's a moral here somewhere:  The entire world, both large and small, loves America's cultural stuff -- from our ideals of democracy that we never carry through on to our hip-hop stars and movies and pop icons to our technical and medical research to our authors, artists and even down to Mickey Mouse.  But nobody in the world loves our armies, deadly weapons, rigged elections, "preemptive" invasions, dictator allies, injustice, corporate greed, media propaganda and economic skullduggery.  Nobody.  http://www.counterpunch.org/2016/11/25/after-the-us-elections-world-exit/