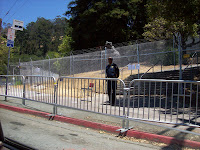 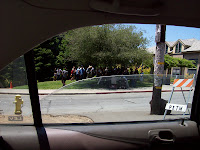 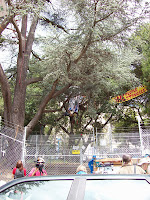 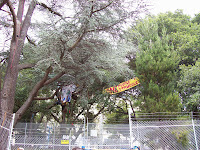 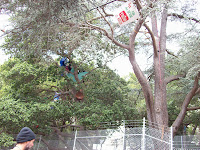 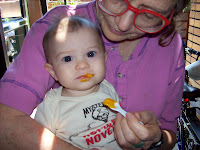 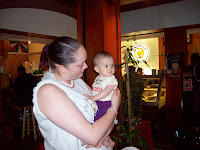 The corporatists vs. the grandmothers: UC Berkeley regents play hardball with the tree-sitters

(Photos are of a UC Berkeley policeman -- standing ironically in front of a statue of the bear mascot that represents UC's fine academic tradition -- on one side of the road and grandmothers "loaded for bear" on the other; tree-sitters and trees hemmed in by Cyclone fences and barbed wire; and me, my daugher Ashley and my granddaughter Mena tasting a free sample of gelato)

This morning me and my six-month-old granddaughter Mena went for a walk, over to the College Avenue section of Berkeley. First we went to Nabalom bakery for a blueberry bran muffin for me, then cruised through Sweet Dreams toy store, saw a high chair that had possibilities for sale at a yard sale, bought cookies at the Move-on bake sale over on Prince Street and ended up at Whole Foods buying a jar of organic baby food for young Mena. Sweet potatoes.

Baby Mena wasn't sure if she liked sweet potatoes or not but while she was trying to decide, and I was deciding whether or not we were going to need to get hosed off when we got home because there was mushed baby-food sweet potatoes everywhere, a woman about my age came up to us and started chatting with young Mena. "I've got a granddaughter too," she said. Instant bonding!

"My daughter adopted my granddaughter in Uzbekistan," the woman informed me. "It used to be that single women could adopt from China but not any more. You need to be married. And it's getting harder and harder to adopt from Guatemala. So Uzbekistan is the place to go now."

Interesting. "How old was the baby when she was adopted?" I asked.

"Six months. They are very rigid over there. You have to go there for six weeks to make sure that you are bonded with the baby before you can actually adopt. It's an expensive and time-consuming process. But worth it!" The grandmother smiled. "My little granddaughter is intelligent, has a wonderful personality, can recite most of the alphabet and is cute as a button." What? At only six months old? "Oh, no. She's two years old now." Whew!

"But when we first got her, she was living in an orphanage that was understaffed and she hadn't been held a lot. And, frankly, we were quite worried about her. But she turned out fine."

Meanwhile baby Mena was smiling at the other grandmother at the same time that she was spitting sweet potatoes out, having decided that she liked them but didn't quite know what to do with them -- or how to keep them in her mouth. Then she stuck out her tongue. "Mena, I can't feed you if you stick out your tongue!" Then Mena helpfully gave me a Bronx cheer.

"Well, I've got to run," said the other grandmother. "I'm on my way to bring food to the tree-sitters up at the university."

"Hey, yeah," I replied. "I saw that on TV the other night. How are they doing up there."

"Basically, the university Board of Regents has decided to starve them out." OMG. The regents are so intent on building that gym/sports complex that they are willing to kill people to do it? I was shocked.

"They have been up in the trees for three days now, during this heat wave, with no food and no water. There are a bunch of us grandmothers who are going up there today at 2 pm to try and bring them supplies."

Building a sports facility is now more important than human life? Let me take this in for a moment. First you have one of the most beautiful groves of old oak trees in the world. Then you have corporatists controlling the University of California who want to cut them all down. Then you have the fact that the gym complex is right on a major earthquake fault. Then you have tree-sitters who are willing to risk their lives to protect the ecology but are being described on the evening news as just some sort of fanatic fringe element who are living up in the trees. Now what does all this have to do with learning and academia? What kind of message are the Regents sending UC students? That corporate growth is more important than trees, more important than human life....

And the Regents are teaching us this lesson less than half a mile from the very place that Mario Savio and the Free Speech Movement made their heroic stand back in 1964. "There is a time when the operation of the machine becomes so odious, makes you so sick at heart, that you can't take part; you can't even passively take part, and you've got to put your bodies upon the gears and upon the wheels, upon the levers, upon all the apparatus, and you've got to make it stop. And you've got to indicate to the people who run it, to the people who own it, that unless you're free, the machine will be prevented from working at all!"

44 years have passed and nothing has changed.

I wanted to just cry.

I had moved to Berkeley in 1966 and had missed the original Free Speech Movement. Well. This time I wasn't going to miss it again! "Come on, baby Mena! Let's go put our bodies upon the gears and stop the wheels!" As long as I get you back home by 2:30, that is.

So me and my daughter Ashley and baby Mena went up to the old grove of oaks. On one side of the street were the campus police and the barbed wires and the Cyclone fences and the cherry-picker cranes. And on the other side of the road were the grandmothers. It's the corporatists vs. the grandmothers! Who will win? Shouldn't we all be asking ourselves that question right now?

PS: Ashley had to get to work so we didn't get to stay long at the oak grove but the grandmothers did look determined. I'd put my money on them! And baby Mena got to have her first taste of gelato once we got Ashley to work. But this time both her aunt and her grandmother were more prepared, standing around with napkins this time, ready to clean up the mess. But who will clean up the mess left on our planet by the corporatists?

It looks like it's going to be up to the grandmothers. Again.
Posted by Jane Stillwater