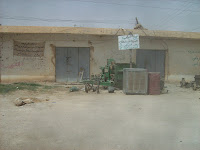 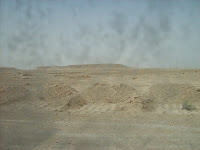 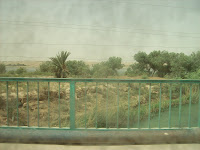 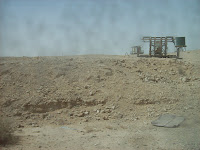 Dust bowl: Like Okies in the 1930s, Iraqi farmers must move on or dig in
Last June, I attended the 2007 Book Expo in New York City and when I walked into the gigantic Jacob Javits Center, all I could see was oceans of books. There were 5,000 booths and each booth had a publisher and each publisher was just dying to give me a free book. It was Heaven! And along with the 30 or 40 other booksI scored from various publishers, I also received a copy of Cyan Press's new book, "High Tea in Mosul".

Unfortunately, however, I didn't get around to reading "High Tea" until I got to Iraq last week and now I'm still not going to finish it because at least ten people here on the Marine base have asked me if they could read it so I'm leaving it behind when I go. But I thought I'd give you some quotes before I pass the book on and go off to catch my flight back to Kuwait this afternoon. Inshallah. I missed the flight yesterday because a sandstorm was brewing. But hopefully I will fly out today.

"On May 16 [2003]," said the book, "five days after landing in Baghdad and without any apparent attempt at wide-ranging consultation on what such sweeping moves [such as dissolving the Iraqi army, sacking most senior civil servants and curtailing moves toward the creation of an interim domestic government] might have on the social landscape, Bremer transformed Iraqis from friends-in-waiting to resentful foes. Suddenly hundreds of thousands of people were without work and income."

Did Bremer do this deliberately in order to promote chaos in Iraq -- following the Bush-Cheney neo-con plan that Naomi Klein labeled "Disaster Capitalism" wherein super-profits are made for a few top dogs as a result of the mega-disasters suffered by the rest of us? Or was Bremer just stupid?

"Jane, you think too much," said my conscience. "You are in way over your head here, trying to figure out what all the good guys and bad guys are up to -- and trying to figure out which is which. You just need to chill out and go back to California." Hey, I been trying! But that sandstorm canceled my flight yesterday and today I actually made it as far as the airfield before they told me that THIS flight was canceled too because some stupid bird had just flown at our plane and punched a hole in the tail. That's war for you. War is hell.

"But Jane, you are the one who is always saying that what is happening now in Iraq isn't a 'war'." Okay then, if it's not a 'war' then what is it? "In Iraq, we appear to be witnessing the deliberate creation of chaos by all those who benefit from chaos."

I'm tired of chaos. I don't do well with chaos. I want peace and quiet. Fortunately, there is a lot of that in Al Anbar province. But what about Baghdad and Mosul and Basra? Who is benefiting from creating chaos there? I'm not really sure. But I'm definitely here to tell you that the Average American is NOT.

"We are going to have to get out of Iraq," I preached to a KBR contractor sitting next to me in the giant Quonset hut that passes for an air terminal at Al Asad, "because America simply cannot afford to stay here any more."

"Heck, no," he replied. "In another two or three years, the oil here will start to pay for everything America has spent on the war." Everything? Really? THIS is the plan?

Then we trudged off back to the airbase to spend the night while the bird-hole in the airplane got repaired. But I couldn't sleep. I just kept thinking about farmers -- no, not the winner of the "Farmer Wants a Wife" reality show. I got to thinking about Iraqi farmers.

By 5 am, I was all ready to jump up and go track down and interview some Iraqi farmers. Everyone here has read Steinbeck's book entitled "The Grapes of Wrath," about the terrible dust storms in Oklahoma and Arkansas during the Great Depression -- it's required reading in high school. So. Is farming in Iraq like that too? A dust bowl where you either dig in and stay by the skin of your teeth or, like the Joad family, move somewhere else?

My great-grandfather on my father's side was a deputy US Marshall at Talequa, Oklahoma. My grandfather was an itinerant sharecropper who moved west around 1910. I can relate to farmers! But where am I going to find an Iraqi farmer who speaks English on a Marine airbase out in the middle of nowhere at 5 am?

When people here refer to sandstorms, their terminology is wrong. It's not sand in the air. It's dust. A sandstorm here basically looks like very thick smog. As I flew into Kuwait last week, the whole country looked like China had -- covered with smog. But it wasn't smog. It was dust. Billions and billions and billions of particles of dust. It reminded me of Oklahoma in the 1930s.

If I ever get a flight out of this dust bowl, I'm going to go off to this year's Book Expo being held in Los Angeles on May 29. And I'm going to get another three tons of free books. But if I can't get a flight out of here and am stuck in Anbar province forever? Not to worry. I've got a mission. I've got a goal. I'm going to go out and interview farmers. "What would you do if you had unlimited water?" I'd ask. Because, in the end, after everything is said and done, if you are an Iraqi, water is life. Water is even more precious than oil.

PS: I am not totally without resources here regarding information about farmers. By 7 am, I had managed to track down an actual expert on Iraqi dirt -- in the airbase's dining facility, eating boiled eggs and Froot Loops. The man actually had a PhD on the subject of Iraqi soil.

"Here in Iraq," said the expert, "they have had a wind erosion problem since they created this desert. I've seen too many water patterns created by rivers and streams to think that this area has always been a desert. Geological formations indicate it was once pretty good land."

"Really? So it wasn't always like this? When did it start to change?"

"I don't know exactly but would say probably several thousand years ago."

"Do you think they could ever get it restored?"

"It will never change back the way it was completely," replied the expert, "but there is a lot they can do to manage resources here that will really help improve the current situation. First, we need to deal with the way that the nomads graze their sheep. We have several million sheep here in Anbar right now and their ability to de-nude the landscape is remarkable. And they come down into the valleys at night and eat farmers' crops as well. And if you notice on the banks of the river here, the riverian area -- the green part that usually covers the area near river banks -- it has been totally eaten away."

"Holy sheep dookie!" I said to myself. "Have there always been this many sheep around here?"

"No, actually, we are currently down from five million sheep because we are going through a famine here right now because they have missed their usual seasonal rains."

"Is this because of global warming?"

"I don't think so. This sort of drought has also occasionally happened in the past as well."

"So do you think that what is happening here is analogous to the dust bowls of the 1930s in Oklahoma and Arkansas back in the States?" The expert nods his head. "And so are the farmers leaving the land here like they did in Oklahoma -- or are they staying around and toughing it out, do you think?"

"Many people in this area have already left. They are the richer ones, the ones who can afford to leave. But the poor ones are pretty much stuck here. They are staying. They can't afford to go anyplace else."

"And how do the Iraqi farmers feel about the Americans?" I asked. This man had been out talking to Iraqi farmers. He would know.

"Where do the farmers get their water?" I asked.

"Out of the river or out of canals. They have small gas engines that pump the water. It's pretty much a hand operation. They grow a lot of vegetables -- cucumbers and tomatoes. But these are for local consumption. They don't usually even sell them in Haditha or Hit, let alone send them to Baghdad. Even sending them as far as Hit is too far." What? No Saturday morning farmers markets? Now there's a project I could work on. Are these tomatoes organic?

"The farming patterns here have changed in the last few years," commented the expert. "Farmers today only farm half the land that they did ten years ago. They farm only along the river, not further out toward the desert. Those who can have already left. And then there's the death tolls." What death tolls? But the expert had gotten up to get a cup of coffee and when he got back, I forgot to ask.

"The one thing that's never been broken in this country," continued the expert, "is Baghdad's ability to get food out to the people -- even the farmers. Rice and lentils. No one has gone completely hungry. But farmers still grow crops to supplement their diet and income. And the war -- the actual shooting part of the war -- has greatly effected farming and farm life.

"So. What happens next?" I asked. "Is the next generation here planning to continue staying down on the farm?"

"Frankly, most of them would rather be in the Iraqi police force or join the Iraqi army. Farming is hard -- especially when you have to do it with sticks."

"Hoes, shovels, picks. They don't have plows or plow animals here -- and definitely not tractors. In fact, they farm more poorly now than they did here in Roman times or the Mesopotamians did. They actually knew how to farm better back then."

"There are several reasons. Firs it the problem of salinization. Next there is the war, an obvious disruption of supplies and security. And, third, farmers often lack the will to make things better."

"Do you see any hope on the horizon for the farmers of Anbar province?"

"Well, this country does have the money. But whether they are willing to do this in a proper manner that will build character and integrity is yet to be seen. And the farmers need tractors, solar pumps, proper sheep management and salinity testing."

Using electro-magnetic equipment to test the salinity of the soil and to set up a de-salinization process. It can be done. They did it in the Imperial Valley in California. There is an accumulation of salt in the soil here that is a result of the 140-180 surface inches of evaporation, leaving salt behind in the soil."

Then we finished eating our breakfast and I thanked the expert for his time. He had answered my main question. Yes, the situation here in Iraq is very much like the situation in Oklahoma in the 1930s. But will the Iraqi farmers also get a new deal? That remains to be seen. And will this fabulous late-breaking scoop about Iraqi farmers of Anbar win me a Pulitzer and make the editors of the New York Times turn green with envy? That too remains to be seen.
Posted by Jane Stillwater