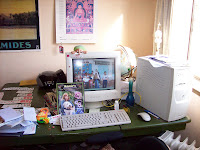 Dear AOL subscribers: You can no longer receive e-mails containing the word "Blogspot"

Guess what, AOL subscribers? AOL has just blocked me from sending you any e-mails.

First I got thrown out of Iraq. Then I got chased down the street by American rent-a-soldiers in China. And then the editor of my local newspaper told me flat-out that it hadn't been publishing my stories because its readers mostly think that I didn't really go to Iraq or China or wherever but simply made all of that stuff up! And then I watched "The Most Important Video You'll ever See," wherein some college professor lectured me on the arithmetic importance of the exponential function in determining that our population growth, need for oil, inability to discover the same amount of oil in the next few years that we have used up in the past 100 years, etc. is dooming the human race to possible extinction within my lifetime. And now I'm being actually blocked by AOL. Can things possibly get much worse? More than likely.

I just applied to go on a tour of the White House. And you just KNOW that I'll also get turned down for that.

My life is in the dumps. Nobody loves me. I'm doomed. And nobody buys my book either. I'm going to go sit on the steps of the capital building in Washington DC and starve myself to death unless the Senate agrees to throw George Bush in jail. I might as well get SOME results from my misery.

And now I'm being blocked by AOL. Crap.

So I called up the AOL guy at 888-212-5537. "WHY is AOL blocking me?" I whined. Am I so politically radical that they think that I'm a home-grown terrorist or something? Or is it just Murphy's Law attacking me again. "What's happening here?" Spill the beans.

"We aren't just blocking you personally. We are blocking everything that contains the domain name 'Blogspot'. It isn't just you." What? AOL has arbitrarily decided to block one of the largest domain names in the whole freaking world? Can they DO that? Apparently they can.

"Yeah." Wow. AOL must REALLY hate bloggers. But at least they don't hate me personally. Or do they? What if I am the cause of them deciding to shut down millions and millions of happy bloggers? Then EVERYONE will hate me instead of AOL. I'm doomed. I'm going to go off and hide under the bed.

"But," I finally ventured to ask, "what if AOL decides to block the CNN domain name too? Or Reuters? Or Oprah? Could they do that?" Apparently they can. So. All you AOL subscribers out there? If you don't hear from me ever again, that's the reason -- either that or because I'm still hiding under the bed.
Posted by Jane Stillwater