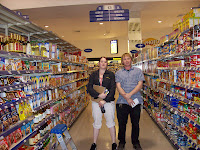 (Photo is of Tim on his last day at Walgreens, across the street from Savo)

More and more, it seems to me that living at Savo Island is like living in a reality show. Living here at Savo is like living in the Big Brother House. Lots of gossip, lots of intrigue. If only we could get Julie Chen to move in!

"Hi, Jane. There's something I'd like to ask you. Have you formed any alliances yet?" Everyone knows that in order to survive on a reality show, it's crucial that you form alliances from the very beginning. Have I made any alliances here? No. "Jane, you're screwed."

Of the 11 members now serving on our Board of Directors, eight of them are in an alliance. How do I plan to survive here up against those kinds of odds? Out-wit, outlast and outplay!

"Let's take a look inside the Big Brother House," sez Julie. "There are 57 units here in our HUD-funded housing project. Of those 57 units, two are vacant, most receive Section 8 subsidies and approximately 12 are over-housed."

"What does it mean to be over-housed?" I asked Julie.

"That's when fewer people are living in a HUD-subsidized unit than are required by law. For instance if only one person is living in a three-bedroom unit, he or she is over-housed." Oh.

And the way that the Board alliance continues to keep themselves and their relatives over-housed is by using their Power of Veto. "Savo's transfer policy states that the Board must approve all transfers. So when it comes time to downsize an alliance member, they simply fail to approve the transfer -- or else they just never bring it up." That's clever. Why didn't I think of that?

"Jane, if you plan to stay in this game, you need to start playing more strategically and form an alliance yourself."

Gee, it's great chatting with Julie. She knows everything that goes on in the Big Brother House. "And what about this new maintenance situation?" I asked her. "What's up with that?"

"Jane, this is total hot gossip," Julie replied. "Apparently the Board alliance is trying to re-hire a former maintenance employee." But that makes no sense. The former employee left the House several seasons ago because the Board alliance hounded him out. And now the current Head of Household wants him back? Why?

"Apparently when he left before, he stripped the maintenance building of most of its heavy equipment." Good grief. And he was allowed to get away with that?

"Yes." But why? Because, according to rumors inside the Big Brother House, the former employee knew too much and this was the way he was bought off." Could that be the reason that the alliance wants to bring him back for this season? To shut him up? Wow!

But wait. There's more. Its time for a Veto challenge. Let's see who will win the Power of Veto. "And the winner of today's challenge is the house-guest who charged the co-op for three nights in a hotel while her unit was being fixed. That's $200 a night! She wins." That's impressive. She must have stayed at the Ritz. But when I asked her a question about how she achieved her exciting new Veto win, she got all pushed out of shape and then turned around and used her Power of Veto on ME.

And you bet that after that experience, I started trying much harder to save my [bottom] and cozy up to the alliance so I wouldn't get voted off next. But my strategy is not working. At the latest Board meeting, I asked the alliance very politely if they would approve a transfer for me so I could downsize to a ground-floor unit because of my painful knees and foot. Me actually offering to downsize? That should make me some allies. It didn't. Not at all. But one alliance member was very nice about it. He leveled with me and told me flat out, "Jane, no one on this Board is going to make that motion." And no one did.

"But this is a medical accommodation issue!" I cried. "I've got medical records to prove it. You HAVE to do this!" Well apparently they don't.

Could it be that I got turned down because I want to leave my son and his family in my beloved current unit -- the one with all the stairs?

"No, Jane, it's not because of that," replied Julie. "An alliance member just did the exact same thing and got away with it. She downsized because she couldn't go up and down stairs and SHE left only one person behind in her old three-bedroom unit. No, Jane, they turned you down because nobody likes you. You have stepped on too many toes." Oh.

So. Will I be the next person voted out of the Savo Island Big Brother House this season? Probably. But in the meantime, I've got one more strategic move to make that might save me after all -- I just filed another HUD Fair Housing complaint, a genius move! Can I possibly manage to form an alliance with HUD, Savo Island's REAL Head of Household? If so, game on!

PS: We have just been told that the re-hab probably won't start until July or August -- oops, yet another spring/summer building season is gonna be missed. However, our loan officer, project manager and architect are working their tails off to see if they can get started sooner despite all the alliance's clever strategies to apparently stall it off. Let's cheer our construction team on! They need to WIN this challenge.

And in order to get HUD to sign off on our re-hab documentation, we need to retain the same Board members until March. For this reason, the annual meeting and election will have to be put off until April. But in April, you know what to do! Make ME the new Head of Household!

Posted by Jane Stillwater at 4:57 PM