Not shopping victoriously: My adventures on eBay while trying to sell my Samurai sword 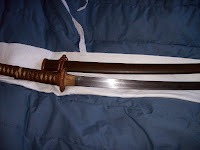 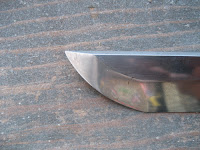 I just tried to sell something on eBay and it was a whole new experience! EVERYONE who looked at my site had something to say. I got an incredible amount of good advice.

For instance, Larry immediately informed me that I was pricing my sword too high. "Jane, you should start the bidding low like around $100 but at the same time you should insert an undisclosed reserve price that will keep the item from selling below what you really want to sell the sword at. Then let the market bid away -- but all the while you have not disclosed what you are actually willing to sell it for." Encode a reserve hidden price? How the freak do you do that?

Someone else wrote me, "It sounds like you are a novice at this, Jane, so let me warn you about something. DO NOT let anyone know where you live! If you must meet a buyer do it at a neutral location, not at your house." Check. No one comes to my house.

"Also, I just noticed that you require a PayPal Account to buy the item," wrote Bill. "Most buyers do not utilize this system because it has problems. I stopped using it a long time ago. And lastly, there are thousands of these swords available at any time on eBay and other sites and most are selling for a small fraction of what you want. Anyway, just want to help U." Thanks for the help. I think.

Then someone else wrote, "Don't listen to Larry and Bill. They just want to buy the sword cheap."

"But you'll never get the price you are asking for unless you show better photographs," wrote David, "including one of the tang with the inscription." Okay, I'll put in better photos. What's a tang?

"I would like to get other photos," wrote Hiro, "of the sword, the tip, and any areas that are problems as cracks, open hada, rust, pits etc...also if possible the signature or a copy of it. You need to take off the handle and show what the maker's inscription looks like." More photos? Bother. So I dutifully tried to pull off the handle. But the freaking handle just wouldn't come off!

"How in the freak does one get this thing off," I wailed.

"You need to take out the peg," answered Frank. What? There's a peg? "Yes. It's mid-way up the handle." But then I couldn't get the peg out either.

"I can't get the freaking peg out!" I fired back.

"Take a pin punch," Allen advised, "and drive the bamboo pin out with a very small hammer. The pin will be tapered so you need to find which side has the smallest diameter and drive it out from that side. It would be really hard to damage the sword this way." Hey, it worked!

But now that I had the pin out, I still couldn't get the freaking handle off. And the time left on my eBay auction clock was running out -- less than 24 hours left! But then someone else saved the day. "If you hold the sword by the handle just beneath the guard and strike your hand (near the meaty part of your fist and thumb) with the bottom of your other hand (in a fist) it may dislodge the blade. Make sure the edge faces away from you! The acceleration of your hand as you strike it is faster than the sword wants to follow. If you can't hold it vertically to do this then get over a bed or mattress and hold it horizontally and repeat. Cushion your hand if the pain is too great." Amazing advice. Who ARE these guys?

Then Allen sent some more good advice. "Don't try to clean the nakago." What the freak is a nakago! "If the red rust makes it impossible to photograph the signature, the only way to remove some of the red rust is to use an ivory or bone pointed tool and lightly rub ONLY the RED rust enough to make a good photo." Great. Now I've got to take another photo and do housecleaning too. And with only 12 more hours left to go.

Then George e-mailed me. "This is the most amusing sword auction I have ever come across....lots of talking and not much selling. I may skip the football game tonight and tune in for the next rounds of comments."

And then Sam put in his two cents. "I notice from the counter that almost 400 buyers have logged on to look at your sword but obviously the minimum price is toooooo high." Too bad for you. This sword is a freaking HEIRLOOM. If it doesn't sell for my price, then I'll just hang it back up on the wall. Some Samurai in 1835 used this sword to BEHEAD people. Then the military used it in the Rape of Nanking, I would bet, because there are freaking NOTCHES on the blade guard (or whatever that thingie is called). And then my father brought it home from Occupied Japan after World War II. this isn't just any sword. This sword has HISTORY. So if I can't get my asking price, I'm not selling. Plus I'm asking that high of a price because I need the money to be able to go back and embed in Iraq in February and to go to North Korea in April -- so it's for a good cause.

In the end, however, George was right. There was just lots of talking and no selling. Not even one bid. What to do? Then I got an e-mail from eBay telling me that for only $5.00, I could simply list it again. So I did. Now it's listed at http://cgi.ebay.com/ws/eBayISAPI.dll?ViewItem&item=230210650171&ssPageName=ADME:L:LCA:US:1123.

And this time I RAISED the price.

Speaking of selling and buying, it's clear to anyone with half a brain in their head that America's very own historic heirloom, the White House, is also up for sale -- and has been for sale to the highest bidder ever since the 2000 election when GWB first Shopped Victoriously and purchased it on the cheap from the Supreme Court.

But as a newly-blooded veteran of the eBay wars, I have another suggestion. Let's give phony Diebold elections and jury-rigged Supreme Court decisions the boot and just put the White House up for sale on eBay instead. And here are the rules: Every bidder must be a citizen. Every citizen can only bid once. And no bid can be over $5.
Since most of the candidates running for president these days (except of course for Dennis Kucinich -- and possibly Richardson, Edwards, Biden, Dodd and Paul) are obviously insincere corporate sell-outs with no commitment at all to America's values and the American middle class, let's stop sending money to their campaign coffers -- which will only to be used against us once they scoop up our priceless White House at fire-sale prices -- and use our money to buy back the White House for AMERICA instead!"

2008 -- this is the year that AMERICA needs to Shop Victoriously.
Posted by Jane Stillwater at 4:37 PM