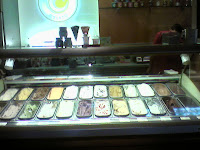 American Gangsta: Selling gold to our mothers & heroin to our kids

Just exactly how far will corporations go these days to make a buck? Sell deadly DDT to Africa on the pretext that it stamps out malaria when they know full well that it doesn't? Go for it. Drive America into bankruptcy by importing cheap stuff from Asia? Sure, why not. Market various wars in order to sell guns to the Pentagon? Okay by them. Profit is king. The sky is the limit. But we already know all that. That is old news.

But in these times of economic decline -- the dollar has dropped 63% in value in the last few years -- I want to focus here on something different and new. "Just exactly how far will a desperate American public go these days in order to save a few cents?" Pretty darn far. Yesterday, your intrepid reporter Jane went under cover to do some on-the-street research.

Borrowing some Calvin Klein sunglasses and an American Eagle hoodie from the teenager next door and wearing my fake aluminum foil grills, I headed off to Hilltop Mall and scored bigtime. Bootleg DVDs! They ain't arresting Halliburton for committing multi-billion-dollar fraud against us taxpayers, but boy will they get on your case if you buy bootleg DVDs! Even as we speak, I'm sitting here trembling down to my bunny slippers in fear that the FBI is gonna bust down my door just for writing this down!

"Psst! Do you gots any...." Yes! And then the dude sold me the bootleg DVD of American Gangsta for a five-spot. My bad.

"The greatest city in the world is turning into a sewer. Everyone is wheeling and dealing...." screamed the hero in charge of wiping out drugs.

Where to start? I know! I'll get an informant. "You wanna know about hop?" said my informant. "I ain't gonna tell you. They'd kill me." But then I bribed the kid with some left-over Hallowe'en candy and he spilled.

"Because it's cheap." Because it's cheap? Our babies are doing the hard stuff now -- because it's cheap? Hmmm. American children are doing whatever it takes to make their lunch money stretch through the week? Good to know. And exactly why is heroin so cheap nowadays? Ask our President [sic]. He'll tell you. There's a bumper crop of opium in Afghanistan this year.

"No child left behind."

And while we're still on the subject of the American economy, let's talk about gold. I'm a mom. I got one hundred dollars saved. I want to leave it as a legacy for my children. But with the dollar descending into the basement like a freight elevator at Macy's, maybe I should protect my investment and save it in gold instead of dollars? Sure why not. So I trotted down to the local gold seller to see how much gold I could get for $100. Well he TRIED not laugh.

"I can sell you a half-ounce Panda for $450." Are you telling me that for $100 I could only purchase ONE-EIGHTH of an ounce? You gotta be kidding. "Hey, these are hard times. The dollar's value is sinking so rapidly that I just had someone tell me that he tried to have CitiBank wire a money transfer to his bank and the bank refused to take it." It refused to take a wire transfer from CITIBANK? Why?

"Many banks are refusing to take wire transfers these days because when a transfer fails, it takes three weeks for them to get their money back from the Federal insurance program and that means that a bank loses three weeks of interest while they are waiting around to get reimbursed. All too many banks are experiencing major cascading cross defaults right now and you don't know which banks to trust so you trust none of them." I didn't know that.

"Maybe you might consider buying silver instead of gold," said the guy. Okay. What you got?

"You can get one Troy ounce of silver for $18." So I bought five silver coins. Hurray! My children's inheritance is protected. Their future is secured!

When I got home, I was listening to the radio and some other guy started telling me, "From core ice samples in Greenland, scientists have determined that the last ice age began when the temperature dropped 15 degrees in one decade." 15 degrees? "Yep. 15 degrees. And that sudden drop didn't allow that decade's winter snows to melt over the length of the summers and the permafrost kept stacking up all over the world so that the last Ice Age came about suddenly -- within the course of ten years!" Really? "Yeah. Really." And all this happened even without the help of greenhouse gases! It looks like silver -- or even gold -- ain't gonna help my children when that happens.

"Stock up on canned food. Store up on firewood. Buy a warm coat." Hey, at least he didn't tell me to stock up on heroin.
Posted by Jane Stillwater at 12:47 PM