Art of concealing the Real Deal: That Trump might not be healthy enough for a second term

So.  What was your main take-away from this year's State of the Union speech?  That the leader of the (theoretically) most enlightened and democratic country in the world is a liar, a bigot, a blasphemer and a war criminal?  Or that Rep. Pelosi might have cajones after all?  Well, sure, that too.

But for me, the most obvious thing drummed into my head that night, time after time in the space of two hours, was that our President is looking rather unhealthy.

Talking-head pundits keep trying to wrongly convince us that Bernie Sanders, the Energizer Bernie himself, might not be physically fit enough to serve out a four-year term in the White House.  But.  I'm totally willing to bet you a McDonald's cheeseburger with fries and a milkshake that, if elected, Donald Trump won't even make it to 2022 before his health fumbles -- let alone survive the whole nine yards.

And I don't make this prediction lightly. 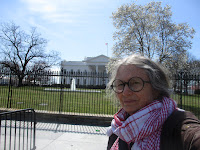 Let's just look at the obvious.  The man is obese.  He appears to have high blood pressure.  We know from his weird 3:00 am Tweets that he doesn't sleep well at night.  He's famous for his sniffles and snorts.  He's got a nasty temper.  His health history for the past 50 years shows us that he didn't take care of himself all that well -- was a party animal, substance abuser, purveyor of prostitutes and close friend of Jeffry Epstein.  And at the State of the Union event, Trump almost made even Rush Limbaugh look healthy.

What are the actual chances of this obviously-unwell septuagenarian lasting another four years?  He could possibly drop dead of a stroke at any minute, bless his heart.  What would an actuarial table tell us?  "No deal."

So let's take these highly significant factors into consideration when casting our ballots next November.  Do we really want the President of the United States of America to end up in a rest home or on life-support because of us?  Let's just quietly retire him to Mar-a-Lago before it's too late and he suffers the Big One because of us.

PS:  Perhaps what President Trump really needs is MediCare for All!