Eyewitness Juarez: There's no "You break it, you buy it" policy here

Like a bull in a china shop, rampaging American industrialists have systematically shattered the infrastructure, culture and well-being of almost every single country on the planet in the past 100 years -- including even America itself.  From Afghanistan to Zaire, whenever American industrialists come knocking at the door, a cry of warning immediately goes out.  "Hide the good silver!  Bury the Wedgwood!  Sell the Spode!  The Americans are here!"

Unlike what happens at Crate & Barrel and Pottery Barn, however, when American industrialists get done smashing everything in sight, there is no "You break it, you buy it" policy for Wall Street and War Street.  They just walk out the door scot-free -- leaving incredible chaos in their wake.  https://www.youtube.com/watch?v=RSqm2FmCdA0

But I digress here.  A little bit.

And yet even after our bulls-on-steroids American industrialists have systematically, deliberately and viciously broken all the Royal Doulton china in Honduras for decades on end, US citizens actually seem surprised, outraged and amazed that Hondurans are coming up here in search of what is left of their broken treasures.

Even in the face of this hard truth, Americans have actually started whining when they are being asked to pick up all the shards that they themselves broke.  "We didn't do it!" Americans cry.  "Somebody else did it!  Not me."  Yeah right.  https://news.vice.com/en_ca/article/kzpabe/the-us-is-propping-up-a-dictatorship-in-honduras

And here in Juarez, I can clearly see the tragic results of all these many decades of bully-ish American behavior in Honduras.  Over a hundred asylum seekers have lined up here at the US-Mexico border, patiently waiting to get access to what had been originally their good china before America broke it.

It brought tears to my eyes as I walked by the asylum seekers each day, huddled masses yearning to breathe free, day after day, on my way back to El Paso.  "How long have you been waiting," I asked one man at the head of the line.

"But where do you go to the bathroom," I wondered.

"There is a restroom back there...."  And then a Mexican priest walked by pushing a small cart, offering the asylum seekers water and bologna sandwiches.  Women and children waited patiently for their turn.  I tried not to cry.

"Is anyone at all being let through?" I asked next.

"13 people were allowed into the United States last night."  And yet, once they get inside our allegorical "mighty woman with a torch," asylum seekers are then jailed, their children are kidnapped and they are treated like dirt -- like they, not the Americans, had rampaged the Honduran china shop.  And yet, perhaps even this brutal concentration-camp life in the US might be better than the infernal Hell that American industrialists have gleefully created in Honduras.  Wall Street and War Street -- hope they never come to my home town too.

One American Border Patrol guy actually told me, "These people have no skills and we don't even know what kind of people they are.  They could be gangsters and crooks for all we know."

I of course couldn't manage to keep my mouth shut and replied, "These are highly skilled people.  They know how to build homes, fix cars and take care of our children.  Plus Trump is always bragging about all the new jobs he has created and how we need lots of new employees to do these jobs -- so jobs are not a problem according to the prez himself.  But even more important, how can these people possibly be bigger crooks than we now have in Washington DC!"  And then I scooted past him just as fast as I could because I didn't want to end up in a concentration camp too.  Whew.

The fourth time I crossed over into Juarez, however, I planned to visit the big mercado at the cathedral plaza and buy dozens of oranges to give to the refugees.  But the asylum seekers were all gone!  Oh no!  "Where did they go!" 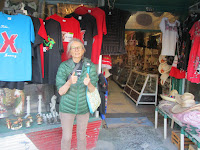 "The Federales came and got them," said my new shopkeeper friend after I had bought a couple of his T-shirts.  Oh dear.  "They came for them with buses and took them to a nearby auditorium."  That's bad.  "No, that's good.  The Federales fed them and cared for them and helped them and worried about them -- because tonight it is supposed to be very very cold."  Now why can't good "Christian" Americans do that too?

PS:  I attended a recent book talk by journalist Peter Phillips.  His new book, Giants, lists the names and info of the 389 people who run this world.  Nothing happens on this planet without their consent.  And they are all greedy and heartless capitalists -- running a Ponzi scheme on the rest of us.  https://www.projectcensored.org/product/giants-the-global-power-elite/

"Almost the only way they can earn interest on their money these days is to continuously instigate small wars," said Phillips.  Not big ones.  Big "wars" would murder too many consumers.  So only small "wars" will do (hopefully).  Does this mean that all those women and children slaughtered in Syria and Iraq and Yemen and Afghanistan and Libya -- and Honduras -- are just smoke-and-mirror tricks to keep stock markets afloat?  And their lives have no value to American industrialists because they do not consume enough?  That's discouraging thought.  Will they blow me up too if I don't promise to consume enough?  https://www.theamericanconservative.com/articles/americas-permanent-war-complex/