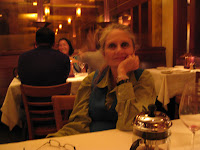 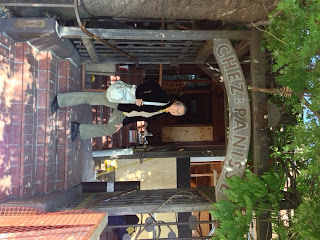 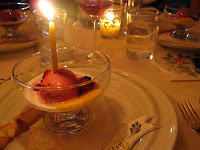 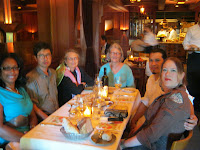 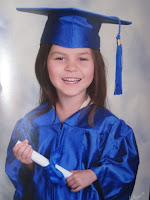 Just in time for my birthday: Chez Panisse is opening again!!!

Who the freak ever wants to get any older?  Certainly not me!  So about ten years ago, I started searching around for some really hard-core reason to actually want to start looking forward to celebrating my birthday each year.  And what could be more exciting and wonderful than having dinner at one of America's very top restaurants in order to celebrate!  So that's what I did.  And now I save up my money every year and then treat myself to dinner at Chez Panisse on my birthday.  It's a great idea.

Now I can actually look forward to getting older (well, sort of).

But there's just one little fly in the ointment here.  Chez Panisse caught on fire last March and the whole front of the building burned down.

Hot to worry, however.  I just heard that Chez Panisse will actually be re-opening again soon http://www.mercurynews.com/breaking-news/ci_22894618/berkeleys-chez-panisse-restaurant-aims-mid-june-reopening -- and just in time for my birthday!  That is, if they ever decide to let me back into the place.

There's a really good reason why we Muslims try to keep away from drinking alcohol -- and therein hangs this tale.  On my 70th birthday last year, I bought a bottle of my mother's favorite brand of cheap vin rosé from the local CVS to take along to the big dinner event, thinking that this would be a great token gesture toward my now-departed mother on my behalf.  After all, she did give birth to me, right?

But my kids just kept pouring the stuff into my glass without me noticing and, darn, by the end of the meal, I was totally smashed and completely passed out.

"Would you like me to call 911 for your mother?" asked a courteous and rather concerned waiter.

"Not necessary," my son-in-law replied.  "She's just drunk."  And then he picked me up, threw my unconscious body over his shoulder and walked out.  How humiliating.  Thank goodness I can remember nothing!

But will Chez Panisse ever let me back in again to celebrate yet another year of getting older?  If I promise to stay on the wagon?  Since my next birthday will be coming up in a few weeks, we'll soon find out.

Last year's birthday dinner was definitely one that I will never forget (but sincerely hope that Chez Panisse won't remember).

PS:  Dinners at Chez Panisse are expensive, sure, but not anywhere near as expensive as one of those screwed-up Lockheed-Martin F-35 bombers that have already proved to be a complete waste of us taxpayers' money http://www.nationofchange.org/f-35-failures-pile-1362494605.

I figure that if our so-called leaders had just taken that $84,000,000,000 that they've totally wasted on the F-35 so far and spent that money on sending people to Chez Panisse for their birthday dinners instead, then approximately 700,000,000 birthday boys and girls could now be celebrating bigtime at the newly-reopened Chez Panisse -- including you, me, and every single other person in the San Francisco Bay Area.  "Cheers!"

PPS:  And with regard to Homeland Security, which has spent most of its Boston budget allotment for the last several years checking up on Occupy Wall Street and other legitimate American protest groups http://www.truth-out.org/news/item/16446-the-wrong-men-how-the-dhs-failed-to-prevent-terrorism instead of following known leads on known terrorists?  Imagine how many more people could have eaten their birthday dinners at Chez Panisse with that wasted money too?

Homeland Security apparently spent billions in Boston investigating Occupy Wall Street movements in Bean Town.  How much have they spent?  Let's say three billion.  That would have been 2,500,000 happy diners celebrating their birthdays at you-know-where instead of so many people in Boston injured or killed because DHS didn't do its job.

Three billion dollars is enough for every man, woman and child in Berkeley to celebrate their birthdays at Chez Panisse 21.9 times -- or else for everybody in downtown Boston to eat there, including airfare here and back.