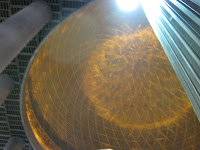 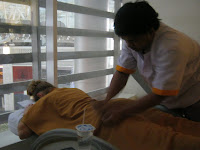 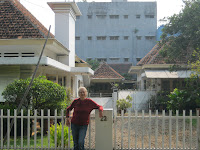 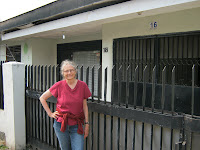 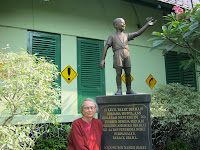 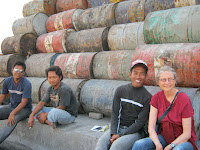 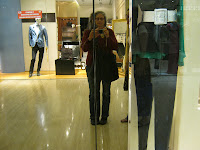 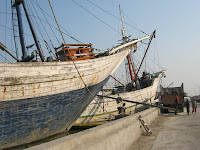 After spending ten hours in the Doha airport and 24 hours at the Singapore airport, I was totally looking forward to spending three whole days in Jakarta -- but had no idea what to expect. Jakarta? Capital of Indonesia? Located on the island of Java, famous for its coffee and Krakatoa? Where Mel Gibson fell in love with Sigourney Weaver during their "Year of Living Dangerously" http://www.imdb.com/title/tt0086617/? Barack Obama's old boyhood home? What is Jakarta really like? I was about to find out.

An old friend of mine from back when we both worked at Berkeley law offices met me at the airport and immediately whisked me off into a fabulous whirl of fun and food -- a sort of three-day-long "Girls Night Out".

Jakarta has definitely changed a whole lot since 1965 when Sukarno was top dog and Linda Hunt was taking photos of poor people rioting in the streets. Poor people no longer riot in the streets here. Now they know better. The foreign and local "extractive industry" moguls who apparently own most of Indonesia these days have done a really good job of teaching Indonesian poor people to know their place -- except of course for a few pesky ingrates over in East Timor. But they no longer count now, having been mostly killed off.

The poor people in Indonesia clearly know their place now -- just like the "extractive industries" in America are also happily teaching America's 99% our places so they can steal our resources too.

But oil companies no longer have to kill people in America to get their hands on our land -- because, unlike the people of East Timor (or Sitting Bull or Geronimo either for that matter), Americans have become so, er, gullible that they now allow the "extractive industries" to legally seize their property by use of eminent domain.

According to environmental researcher Allison Grass, "The controversial Kelo v. City of New London (2005) is credited with broadening the interpretation of 'public use'. In this case, the Supreme Court ruled in favor of New London, deciding that the city could take private property and give it to another private entity for 'economic development'. The Court decided that this met the 'public use' provision of the Fifth Amendment." http://www.commondreams.org/view/2012/08/21-0

What does this ruling mean for Americans? It means that if the "extractive industry" wants your land, they can have it. Period. And you of course will be S.O.L. Never forget that extractive-industry people are running a very harsh economic dictatorship behind that Oil Curtain -- and they are not our friends.

As I was being driven though the streets of Jakarta, it became immediately clear that this city is now more like Dallas than Zuccotti Park. Neiman Marcus fans would feel right at home here. The Bush dynasty would love it. And my guilty secret? I too loved Jakarta.

First my friend and I went off to a top-of-the-line beauty salon for full-body massages. Only five dollars! Then we went to the old port of Jakarta where the docks are lined with funky old wooden schooners still being used for transporting goods to and from Indonesia's 1700-odd islands.

Next we went to visit the old Dutch colony of Batavia. Did you know that the Dutch East India Company was one of the world's very first global conglomerates? Back in 1602, it was a pioneer poster-boy for globalization -- and was probably just as cruel and ruthless back then as Monsanto is now.

What to see and do next? Off to a wonderful Rijsttafel dinner with some delightful Indonesian women and a handful of ex-pats from America, Australia and Korea. And then another body massage. I could get used to this!

Next we experienced a top-of-the-line display of wealth that went way beyond my mere concept of "mall". So much money here in Jakarta. Streets crammed with chauffeur-driven Mercedes and BMWs. And then after the "shopping complex" experience, we visited a folk-art museum, ate avocado ice cream and -- went for a massage!

I owe so much to my friend from Berkeley and her Indonesian friends for giving me the full Jakarta experience.

And the food here! Marvelous. Everyone was getting ready to observe Ramadan in this mostly-Muslim country -- and everyone here was either eating or shopping for food or thinking about eating. Me too!

Next came a tour of Jakarta's largest mosque. "It is the third largest mosque in the world -- only Mecca and Medinah have larger ones." I've been to both those other mosques but this one was different -- all modern in design and using lots of copper and chrome.

Across the street from the mosque was a large European-style cathedral. Catholics in Indonesia? Yeah. Just like there were Catholics in Nagasaki when American pilots in World War II used Nagasaki's cathedral spire as a landmark for dropping their atomic bomb, wiping out 8,500 Japanese Christians attending Sunday services in one shot http://tinyurl.com/8pf7yb6. Ah, the smell of burning Christians in the morning. One of America's finest hours. But I digress.

Time for another massage.

"You know what I would really love to do here?" I asked my wonderful new Indonesian BFF. "Can we go see where Barack Obama lived as a boy and also visit the school that he went to?" The school was easy to find. The two homes where Obama used to live were harder to find -- but a local journalist gave us the 411 and we actually found them.

"Did you know that Barack, as a boy, was reputed to be rather pudgy -- and that he confused his fellow students because his step-father was Indonesian and his mother was a white American and yet he had really curly hair. Most students finally decided that he was from Papua-New Guinea. And did you know that Obama's father was an oilman?" No I didn't. An oilman? Hmmm. Then I can't understand why Republicans don't just love Obama. Republicans always seem to love anyone who exploits natural resources for their own benefit (not ours).

And those were my three days of (not) living dangerously in Jakarta. And now it's time for me to go off to spend yet another night in yet another airport -- Narita, in Tokyo. "Ah, but wait!" said my old friend from Berkeley and my new BFF from Jakarta. "We still have time to fit in just one more massage!"

******
What next? Now I'm trying to go to a six-day vodou ceremony in a cave somewhere in Haiti. Please donate toward my trip expenses here: https://www.wepay.com/xh8kekc

Also my son Joe is trying to raise money to film a documentary on this event. Check out his video of the vodou master here -- a truly heavy-duty dude:
https://www.wepay.com/donations/suzandoc
"This documentary is about capturing a Haitian Vodou Ceremony experienced through the perspective of Suzan (a Shaman leader). The ceremony takes place in a cave that Suzan had lived in for 10 years in Fonds-des-Nègres, Haiti, 114 km west of Port Au Prince."

Need someone to help you throw out stuff? I'm really good at deciding what needs to be thrown out (starting with all those corporate-owned bums in Washington!)
*******

Need an actor to play an older woman in your movie? Then I'm your man! I can portray all kinds of older women -- from judges, business execs and other insane zombies to bag ladies, cancer patients, kindly grandmothers and dying patients in rest homes. I've played them all. So send me a script and let's do this. Hollywood, here we come!

****
Are you a plaintiffs' attorney who is tired of writing those pesky personal injury settlement briefs all the time? No problem! I can write them for you. Years of experience. And pay me only if you win the case.

I also wrote a book about going on Hajj (also included as a chapter in "Bring Your Own Flak Jacket," but this book is cheaper -- but it's worth buying them both!) My book on the Hajj is so outstanding that I bet even Christian fundamentalists will love it! Please buy it here: http://www.amazon.com/Mecca-Hajj-Lessons-Islamic-School/dp/0978615700/ref=cm_rdp_product