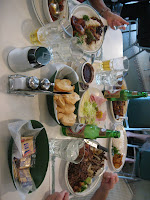 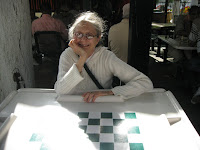 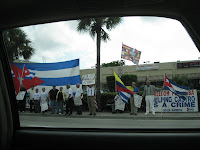 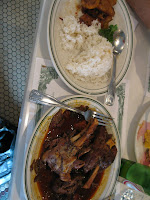 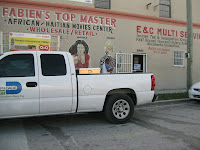 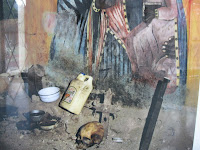 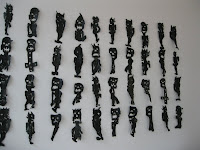 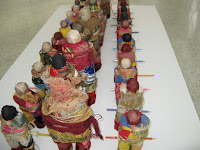 Visiting Little Havana: Will I run into Fidel Castro?

I'm supposed to be flying off to Chile in time for the presidential elections and then cross over the Andes by bus to Buenos Aires -- in search of Evita's ghost. But first I'm going to have a 24-hour layover in Miami. "Want to go visit South Beach?" e-mailed my friends who live there. Forget about South Beach. I want to go see Calle Ocho!
"Well, then let's go have lunch at The Versailles in Little Havana," my friends e-mailed back Yaay! I keep having this feeling that somehow I'm going to run into Fidel Castro there -- cleverly disguised of course but still...
Or maybe I'll see Jennifer Lopez.
Actually, I figure that the younger generation now living on Calle Ocho are getting tired of always hatin' on poor Fidel -- and they might actually even be glad to finally meet this here living legend.
I was supposed to go to Antarctica this week but the ship I was scheduled to go on apparently hit an iceberg, so Chile is gonna be Plan B.
According to James W. Douglass's new book, "JFK and the Unspeakable," President Kennedy apparently was secretly planning a new detente with Fidel Castro back in 1963, just before he was shot in Dallas. In fact, there is much speculation that Kennedy's plans to normalize relations with Cuba -- and Vietnam -- were the very reasons why Kennedy got shot. And I just read where Fidel's reaction to the Kennedy assassination was, "That's bad, that's very bad [for Cuba]" But here I am now, 47 wasted years after the assassination, about to offer Fidel Castro an open invitation to come to the U.S. "Meet me for lunch at The Versailles restaurant in Little Havana? You name the date and I'll be there!"
It's about time that the "Berlin Wall" separating the U.S. and Cuba comes down. And why are we letting a few disgruntled refugees in Miami dictate our foreign policy on Cuba? Do we let a few disgruntled Haitian refugees in Miami dictate our foreign policy on Haiti? Or a few disgruntled Russian refugees in Sacramento dictate our foreign policy on Russia? Or a few disgruntled Israeli neo-cons dictate our foreign policy in Israel? Don't answer that, Mr. Netanyahu!
But before I can invite Fidel to lunch at the Versailles, I have to check out the menu first. So my friends Jim and Nancy are going to take me there tomorrow. But first I have to get to Miami. And that may be a problem. In order to make my plane on time, I have to walk to the Berkeley BART rapid transit station all by myself in the dark at 4 am. "I'll walk with you," said my daughter Ashley. Now THERE is a good daughter!
PS: I made it to Calle Ocho and searched high and low for Fidel Castro. And here are some videos to prove it!
Outside the Versailles restaurant, there was an anti-Castro demonstration going on but most of the demonstrators were rather old. I don't think that young Cuban-Americans think that way so much any more. Here's a video of the demonstration: http://www.youtube.com/watch?v=J2I4UlYH9Nw
Once inside the restaurant, we immediately set to work eating. Here's a video of our food. Yum! http://www.youtube.com/watch?v=qEmBiU_vQ_o Fidel, I think you would love the food here, so I hereby issue an open invitation to treat you to lunch at Versailles -- any time. Just give me a call!
PPS: Then we went off to Little Haiti and visited the excellent Little Haiti Cultural Center and got lost. And now I'm at the airport, bracing myself before taking a red-eye special to Santiago, Chile.
Posted by Jane Stillwater